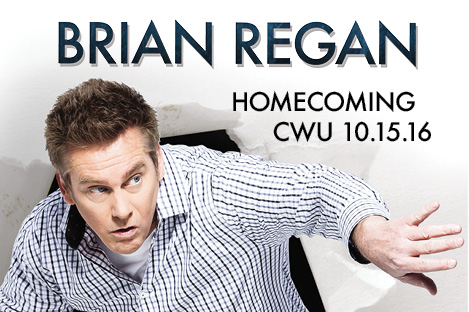 Get ready for a night full of laughter, Wildcats! This year’s homecoming entertainment is stand-up comedian Brian Regan.

You may recognize Regan from his performances on the “Late Show with David Letterman” or from his Comedy Central specials. Regan has performed at sold-out venues around the world, and now he will be performing two shows right here at Central.

Known for his observational comedy, Regan appeals to a wide variety of audiences. His acts are comparatively clean as he generally avoids using profanity. Regan’s humor is often described as a combination of witty, self-deprecating humor mixed with insightful social commentary.

Get your tickets at www.cwu.edu/tickets before they’re gone to see this hilarious comedian perform live!