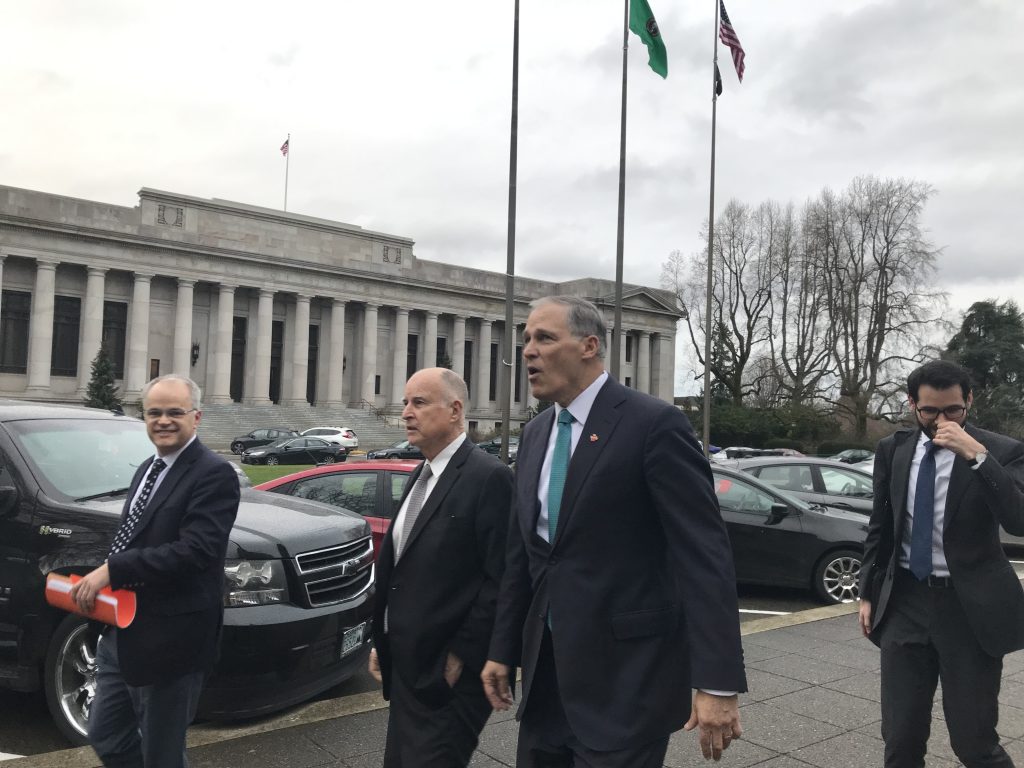 Former California Governor Jerry Brown, middle left, and Washington Governor Jay Inslee, middle right leave the  Legislative Building in Olympia on Thursday, Jan. 17. The two met with Democratic leadership and planned to have dinner at the Governor’s Mansion to discuss environmental policy with more than 70 state lawmakers, according to Inslee.

Just hours earlier, the state Senate Environment, Energy and Technology Committee held a hearing on one of the largest bills in Inslee’s climate package. If Senate Bill 5115 is passed, Washington State would transition to a completely renewable energy economy by 2045. California passed a similar bill last year.

“Virtually everything that we have proposed this year has been accomplished in California,” Gov. Inslee said. “We actually are not inventing a new rocket ship here.”

Many climate bills proposed in this year’s legislature are similar to policies that already exist in California, including tax exemptions on the purchase of renewable energy equipment, restrictions on the use of hydrofluorocarbons, and setting efficient energy standards for buildings.

Past proposals like a carbon fee, carbon tax, and cap-and-trade, were rejected by Washington voters and state Legislators, but Inslee is optimistic that this year’s bigger Democratic majorities will make it easier to push through major climate policy.

“California is doing quite a lot but not enough, and the rest of the country is doing even less, so it’s crucial that Washington state take the next steps,” said Brown. “Humanity is on a collision course with nature.”

This was Brown’s first public appearance since leaving office in California. He ran for President as a Democrat three times, and gave advice to Inslee on his potential bid for president.

In an op-ed published in the Washington Post on Thursday, Inslee wrote that he was seriously considering running for President because he believes that the President should have a commitment to the climate.

The governor previously told The Hill, a political newspaper based in Washington, DC, that he would not formally make a decision until after the end of the legislative session.

“Well don’t listen to me because I didn’t succeed,” joked Brown. “Just get everybody to know who you are… and otherwise keep smiling.”