OLYMPIA — Gov. Jay Inslee stood before the Washington Legislature to deliver his 2020 State of the State Address on Tuesday, Jan. 14.

“Washington state indeed embodies the best in America,” Gov. Inslee said. “We have been honored to be both the best place to do business and the best place to be an employee, and that combination is a rare and powerful testament to our state.”

Even so, he talked about concerns, including homelessness and climate change.

The number of people unsheltered has reached a crisis-level concern that has begun to affect legislator’s constituents throughout the state, according to Rep. Drew Stokesbary, R-Auburn. It’s a problem that lawmakers seem to have different goals and ideas on how to solve.

Gov. Inslee previously proposed a plan to add shelter beds, and rental and housing assistance to reduce homelessness in the state by 50% within the next two years. He suggested funding his plan with more than $300 million from the state’s Budget Stabilization Account, also known as the “rainy day fund.”

“By trying to fund his response with one-time rainy day funds, he’s kicking the can down the road,” Rep. Stokesbary said. “Even if his plan works, we’ll be right back here in 2023, trying to figure out a more sustainable path forward.”

During his speech, Gov. Inslee also expressed his desire to initiate a clean fuel standard, which he insisted would have a minimum effect on costs and a maximum impact on carbon emissions.

In response, Republicans noted the governor failed to discuss the increased tax Washington residents would be paying with the implementation of this standard.

Sen. Mark Schoesler, R-Ritzville, referred to it as “the gas tax without roads”.

Rep. Stokesbary suggested that more responsibility should be put on private sectors and consumers, rather than a top-down government system that reduces carbon emissions.

“Far before the state can mandate away vehicle emissions, you will see consumers voluntarily buying very well made electric vehicles,” Rep. Stokesbary said.

Following the State of the State Address, Sen. John Braun, R-Centralia, gave the Republican perspective on Inslee’s speech. Sen. Braun’s speech focused on the possibility of increases in taxes that may result if Inslee’s plans are put into effect.

“Today we heard more words from the governor about energy, and, again, he said nothing about taking more money from the people,” Sen. Braun said. 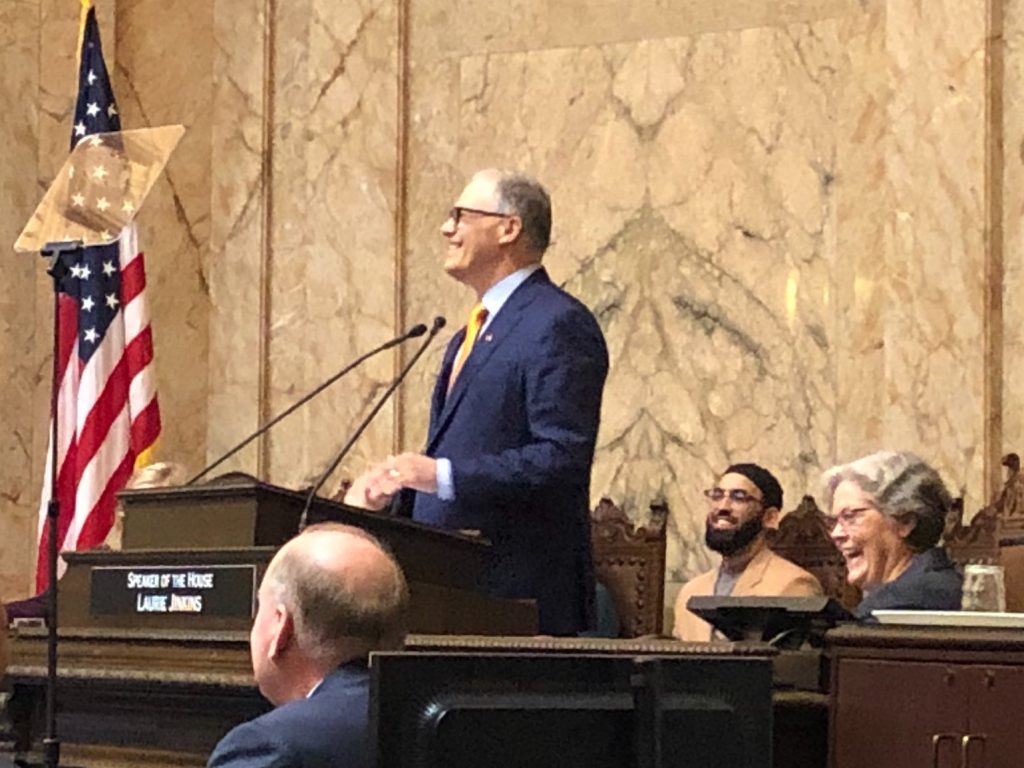