In the week ending January 30, ESD paid out over $268 million for 314,546 individual claims. Since the crisis began in March, ESD has paid more than $14.3 billion in benefits to over a million Washingtonians. 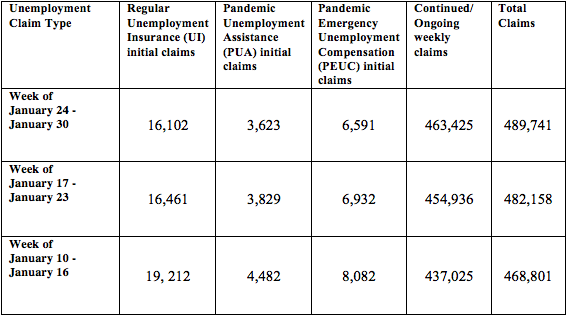 Below is a forty-eight week summary of statewide initial claims filed since the start of the COVID-19 crisis:

Industry sectors experiencing the highest number of initial claims during January 24-30th were:

King County, the most populous county in the state, saw initial regular claims decrease from 4,019 to 3,790 during the week of January 24-30, down 6 percent from the week before.

For employers looking to avoid layoffs or slowly ramp up re-hiring during this crisis, SharedWork is a great program that can help. You can learn more at esd.wa.gov/SharedWork

Please see new charts in the Appendix A below. For complete information of weekly initial claims by industry sector and county for the year to date, also check the weekly unemployment initial claims charts compiled by ESD’s Labor Market & Economic Analysis division. For more information about specific counties, contact one of ESD’s regional local economists.

ESD will send out the next weekly new claims press release on Thursday, February 11, 2021 at 10 a.m. Pacific Time.

‘Lost Wages Assistance’ unemployment funds to be available the week of Sept. 21

Kreidler extends emergency order on telehealth coverage for another 30 days