A story distributed by the WNPA Olympia News Bureau regarding Senate Bill 5577, concerning restrictions on boating activities around southern resident orcas in Washington incorrectly stated that Republican Sen. Lynda Wilson of Vancouver had signed on to the bill.

The proposal was, in fact, introduced to the Senate by ten Democratic lawmakers with no Republican signatories. Also, the name of Shane Aggargaard of Island Adventures was misspelled. The WNPA Olympia News Bureau regrets the errors.

Olympia – Lawmakers, whale watchers and environmentalists reached a rare consensus at a hearing on a proposed speed limit for boats operating near Puget Sound’s endangered southern resident orcas this week. However, they were less successful when it came to measures that would restrict commercial and other whale watching activities in the area.

Senate Bill 5577 would make it illegal for a person to operate a vessel over seven knots in speed within a half nautical mile of southern resident orcas. It would also be unlawful for any whale watch vessel to approach within 650 yards of the orcas until January 1, 2023.

Current regulations prohibit vessels from approaching within 200 yards of a southern resident orca or positioning themselves within 400 yards of the expected path of the animals.

The bill was introduced in the Senate by nine Democrats and one Republican, Senator Lynda Wilson, R-Vancouver.

The bill incorporates several recommendations from the Southern Resident Orca Task Force, which Governor Jay Inslee formed last year to develop a long-term plan for protecting the species. A companion bill also has been introduced in the House.

“Why do we need to quiet the waters?” asked Todd Hass, who led the vessels working group for the task force. “Because orcas are highly-auditory animals and take advantage of the typically great benefits of using sound-based signaling and hearing rather than vision.”

Watercraft operated by the federal government would not be subject to the regulations, nor would state, local and tribal vessels conducting law enforcement, search and rescue, and public safety missions.

The bill would also establish a permit system for whale watching operations in the inland waters of Washington. With permitting, regulators could refine the distance, the number of vessels and amount of time spent with the whales. The annual fees would range from $425 to $2,925 depending on the number of passengers carried. Only some operators with previous whale watch experience in Washington waters could be licensed.

“Slow boats are quiet boats,” said Shane Aggregard, a captain and general manager at Island Adventures Whale Watching, who has been operating tours since 1996. “My 30-meter catamaran that carries 150 passengers is quieter than my 28-foot Boston Whaler.”

Aggregard said he agreed with the speed limit but opposed the 650-yard viewing distance for whale watch operators.

“If you increase the viewing distance, it’s essentially a moratorium,” he said. “If you have a moratorium, there won’t be boats on scene to lead as an example.”

“They do act as a sentinel around those whales,” said Steve Finney, vice president of the Recreational Boating Association of Washington. “They are professional. They know what they’re doing, and the recreational boaters do respect them for that.”

The bill’s supporters said that given the precariousness of the orcas’ continued existence, every measure should be taken to ensure their survival.

“The Southern residents are looking a lot like the canaries in the coal mine in the Salish Sea and Puget Sound,” said Captain Alan “Hobbes” Buchanan, a Friday Harbor-based whale watch operator. He said he closed his whale watching business last October when he said he realized he was “part of the problem.”

“We need to take a precautionary approach given the severity and urgency of the situation,” said Nora Nickum on behalf of the Seattle Aquarium. “And we believe that means advancing all of the measures in this bill.” 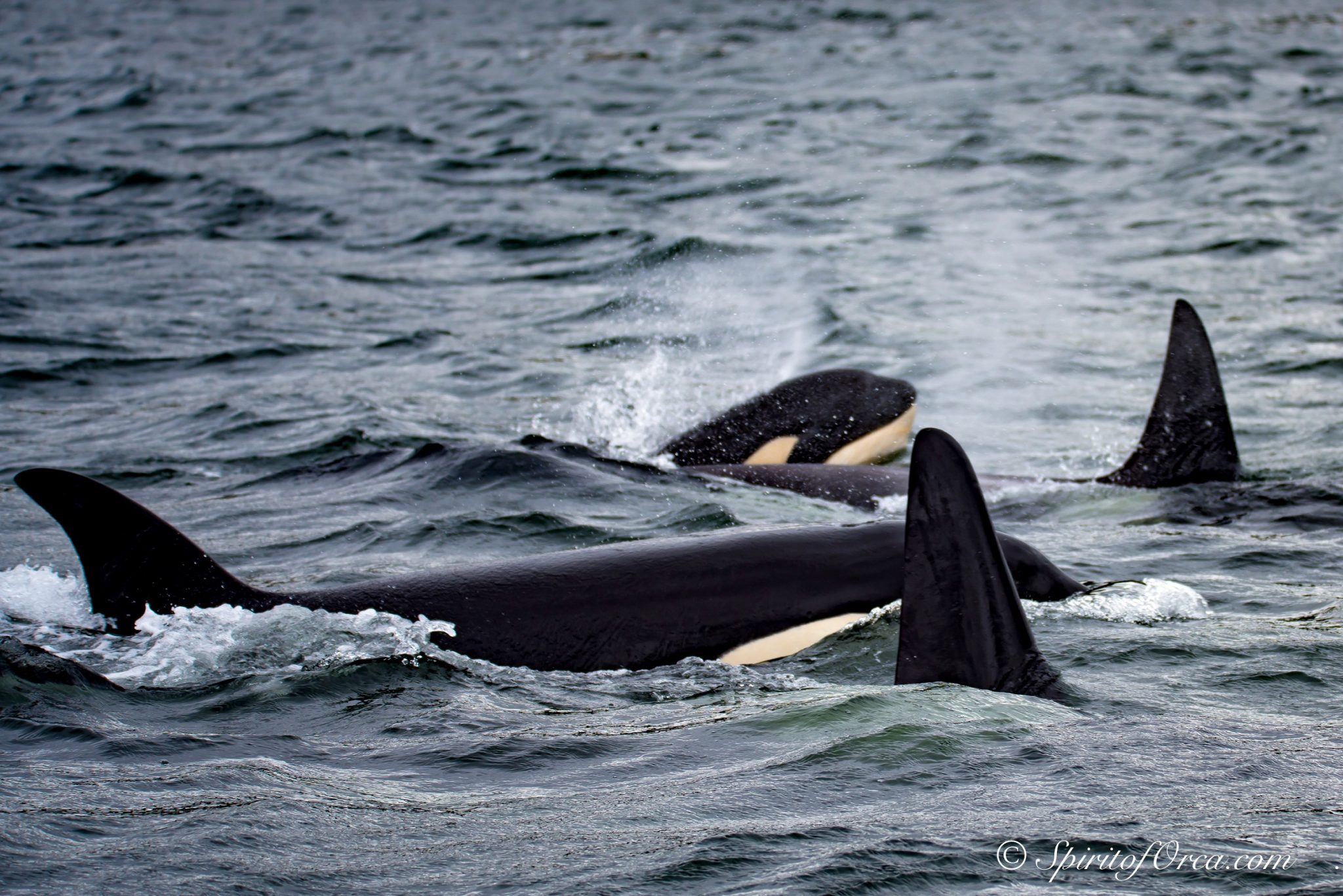 Puget Sound’s southern resident orcas, who use echo-location to find food, would be protected by a new speed limit for vessels approaching the endangered species. –  Photo by Ken Rea, SpiritofOrca.com