“Although payroll job growth continued in July, the pace at which the jobs were added slowed,” said Paul Turek, economist for the department. “Over the last three months, nearly half of the jobs lost during the pandemic have come back, but there remains a long way to go.”

ESD released the preliminary job estimates from the federal Bureau of Labor Statistics as part of its Monthly Employment Report.

The department also announced that June’s previously reported unemployment rate of 9.8 percent was revised upward to 10.0 percent. June’s preliminary estimated gain of 71,000 jobs was revised to a gain of 140,600 jobs.

ESD paid unemployment insurance benefits to 590,401 people in July, an increase of 24,601 over the previous month.

More employed and unemployed workers enter the state labor force
The state’s labor force in July was 3,968,200 – an increase of 75,000 people from the previous month. In the Seattle/Bellevue/Everett region, the labor force decreased by 2,200 over the same period.

The labor force is the total number of people, both employed and unemployed, over the age of 16. 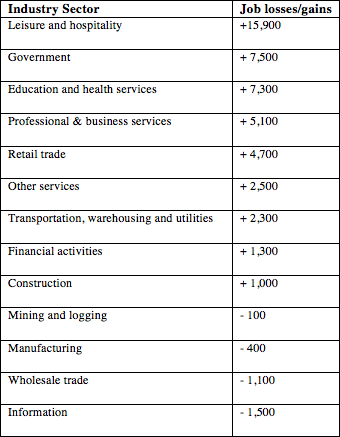 Year-over-year loss in payroll employment evident in public and private sectors
Washington lost an estimated 245,000 jobs from July 2019 through July 2020, not seasonally adjusted. Private sector employment fell by 7.3 percent, down an estimated 212,600 jobs, while public sector employment fell by 5.6 percent with a net loss of 32,400 jobs.
From July 2019 through July 2020, all thirteen major industry sectors contracted except retail trade.
The three industry sectors with the largest employment losses year-over-year, not seasonally adjusted, were:
Labor market information
Check it out! ESD has new labor market information and tools, including interactive Tableau graphics to highlight popular information and data.
WorkSource
Employment Security is a proud partner in the statewide WorkSource system, which provides employment and training assistance to job seekers and businesses. While WorkSource centers are closed for in-person services during the COVID-19 outbreak, customers can still get help from WorkSource staff by phone and through the Live Chat feature on WorkSourceWA.com. The website provides access to thousands of Washington jobs and other employment resources. Chat agents cannot answer unemployment benefit questions.

Note: The U.S. Bureau of Labor Statistics (BLS) recently updated its “alternative measures of labor underutilization” for states to include annual averages for the first quarter of 2020. One such alternative measure is the U-6 rate, which considers not only the unemployed population in the official “U-3” unemployment rate but also marginally attached workers and those employed part-time for economic reasons. The U-6 rate is defined by BLS as the “total unemployed, plus all marginally attached workers, plus total employed part-time for economic reasons, as a percent of the civilian labor force plus all marginally attached workers.” This U-6 measure measures the “unemployed, underemployed, and those who are not looking but who want a job.”