For years, state and federal civil rights law has prohibited the targeting of individuals by law enforcement based on their look and appearance.

But motorcyclists are not afforded any legal avenues under those anti-profiling laws.

On Friday, bikers from across the state rolled into Olympia hoping to change that.

They expressed support for House Bill 1152, which would prohibit a law enforcement officer or agency from engaging in motorcycle profiling and give bikers legal recourse if they are the brunt of profiling.

Of the 34 people who signed in to speak at the hearing before the House Civil Rights & Judiciary Committee, 30 were in favor of the bill.

“I’m very fond of the Washington state constitution and what it says about establishing and maintaining individual rights,” said Richland resident Donnie Landsman, who was with the advocacy group Bikers of Lesser Tolerance. “We’re asking for maintenance.”

Current state law defines motorcycle profiling as illegally targeting someone riding a motorcycle or who is wearing motorcycle-related paraphernalia for arrest, search, or to stop and question.

“I would guess that those of us sitting up here can look out into the audience and probably guess who drove out here today on a motorcycle,” said Rep. Steve Kirby, D-Tacoma, the bill’s prime sponsor.

In 2011, the Legislature passed a bill that required motorcycling profiling to be included in law enforcement training and policies along with racial and other types of profiling.  But it did not specify any legal action that could be taken by those who believe they were profiled.

“This is a group that is not asking to be a protected class,” Kirby said. “But they would like to have the remedy that protected classes have when it comes to discrimination of this kind.”

The new bill would prohibit law enforcement officers and agencies from motorcycle profiling and also allow motorcyclists to seek injunctions of further violations and recover damages, attorney fees and costs.

Two people who testified against the bill said they were in favor of the provision that prohibits law enforcement from profiling motorcycle riders. But they expressed concern that the added legal avenue for motorcyclists would tie up officers and state resources if they became engaged in a lawsuit.

“It’s just another thing that takes us away from our duty,” said Lacey resident James McMahan on behalf of the Washington Association of Sheriffs and Police Chiefs.

Washington State Patrol Capt. Monica Alexander said she is opposed to the legal remedy because her organization already investigates every complaint. However, she said she agrees with the anti-profiling language. “It reads almost as though it came right out of our regulation manual.” 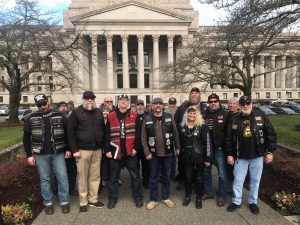 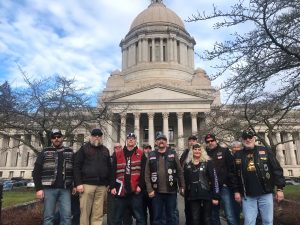 Legacy Washington’s ‘Ahead of the Curve’ book launched