The other industry sectors that experienced substantial increases in initial claims over the week were in Retail trade (+774) and Manufacturing (+707). The increases in retail trade are partly associated with post-holiday layoffs in the retail trade sector.

A total of 90,846 Washingtonians have also received $49.9 million in Pandemic Relief Payments (PRP). The PRP is a one-time payment of $550 for some recipients of Pandemic Unemployment Assistance (PUA) benefits. You can learn more about these payments on our website.

In the week ending January 2nd, ESD paid out over $182.7 million for 316,175 individual claims. Since the crisis began in March, ESD has paid more than $13.4 billion in benefits to over a million Washingtonians. (this total does not include the $49.9 million in PRP payments sent last week). 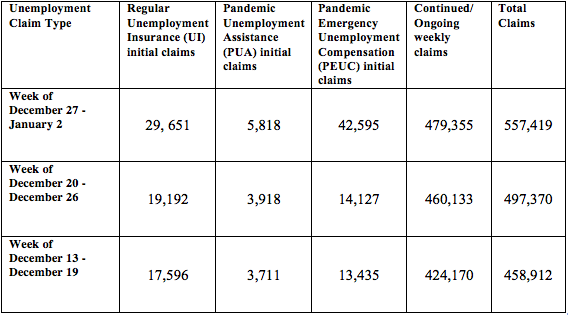 Below is a forty-four-week summary of statewide initial claims filed since the start of the COVID-19 crisis:

Industry sectors experiencing the highest number of initial claims during December 27- January 2 were:

King County, the most populous county in the state, saw initial regular claims increase from 4,029 to 6,367 during the week of December 27- January 2, up 58 percent from the week before.

Other counties with the largest number of initial claims during the week were:

For employers looking to avoid layoffs or slowly ramp up re-hiring during this crisis, SharedWork is a great program that can help. You can learn more at esd.wa.gov/SharedWork

ESD will send out the next weekly new claims press release on Thursday, January 14, 2021 at 10 a.m. Pacific Time.