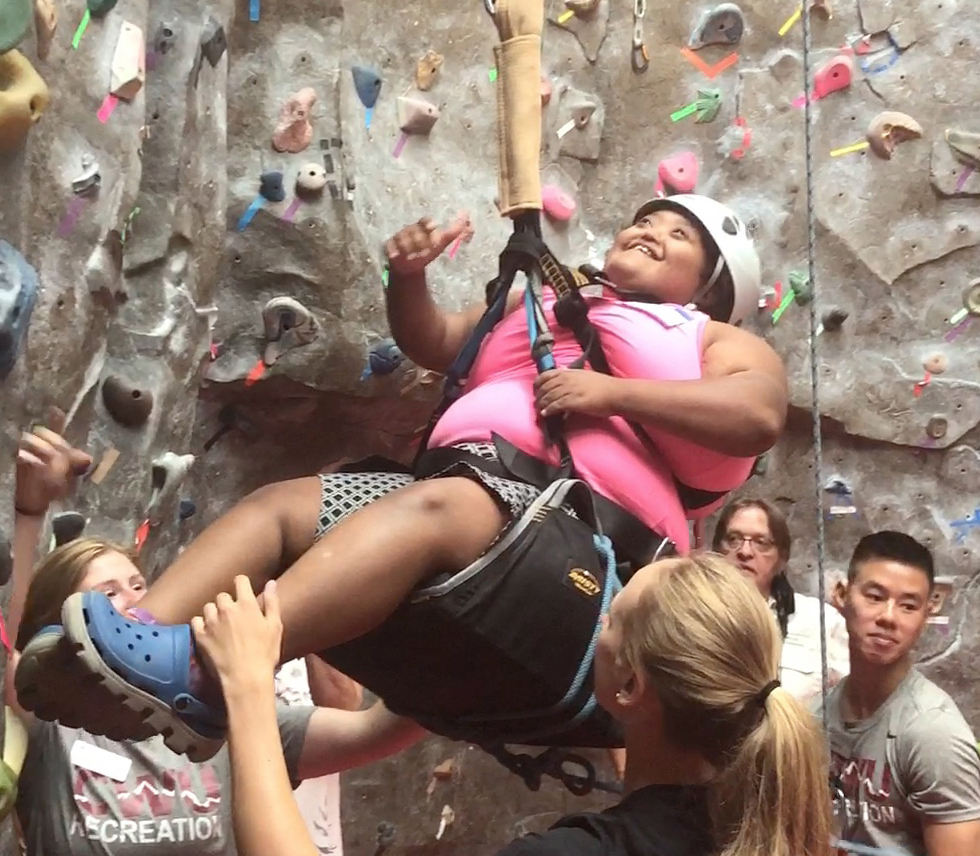 (Originally published in the Aug. 23, 2018 print edition of the Northern Kittitas County Tribune. Get a copy sent anywhere in the U.S. here – archived copies subject to availability. ) 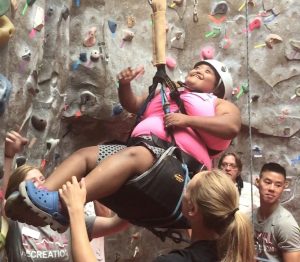 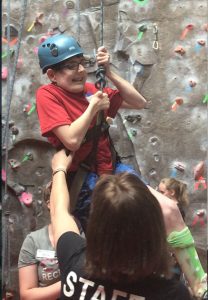 ELLENSBURG – The only program of its kind, Courageous Kids Climbing will take place just 15 times this year in Washington, California, Idaho and Nevada. One of those sessions was held Saturday, August 11, at the rock-climbing wall in Central Washington University’s (CWU) Student Union and Recreation Center.

Said Riechmann, “We say children, but we invite anyone between the ages of three-months and 103-years with special needs, physical or developmental, to participate in this event. There were seven participants of different ages and needs participating on Saturday. We’ve also worked with wounded warriors, even cancer survivors.”

CWU Recreation Climbing Wall and Challenge Course coordinator Melissa Robertson said, “By hosting events like this we are increasing the awareness that we are all capable of so much more than we often believe.”

The goal of the event is to help participants acquire or develop skills such as hand-eye, hand-foot, and left-right coordination, focus and problem solving.

“For some, who are confined to a wheelchair, we help to get them from a horizontal to a vertical world,” Riechmann said.

That included Royal City’s 21-year-old Taysha Snyder, who attended the CWU event along with her 20-year-old brother Zach.

Taysha, who suffers from Down Syndrome, has come to the CWU session for each of the three years the university has hosted the event. This year was special for Sena Snyder, who adopted the two.

“Because of my daughter’s anxiety, she wouldn’t do anything with the harness without me being right there,” she said. “This year, she’s doing exactly what they’re asking her to do.”

Not only that, but Taysha actually made it to the top of the rock wall – 50 feet in the air, to her obvious delight, not-to-mention that of her mother.

Zach, who is autistic with additional neurological complications, also showed significant gains from previous years, particularly in terms of his confidence level, according to Sena.

That came as no surprise to Aubrey Edwards, a junior at CWU serving with the university’s recreation staff supervising the rock-climbing facility. This was her second year working with the event.

“You can see it constantly throughout the day – the confidence definitely grows tremendously,” she said, “though this was definitely crossing new boundaries for some of those who had never climbed before, but everyone climbed super hard. The kids came in to test themselves and test their limits, and their parents really loved to see them climbing.”

The Burn Ban and Fireworks Restrictions in Kittitas County