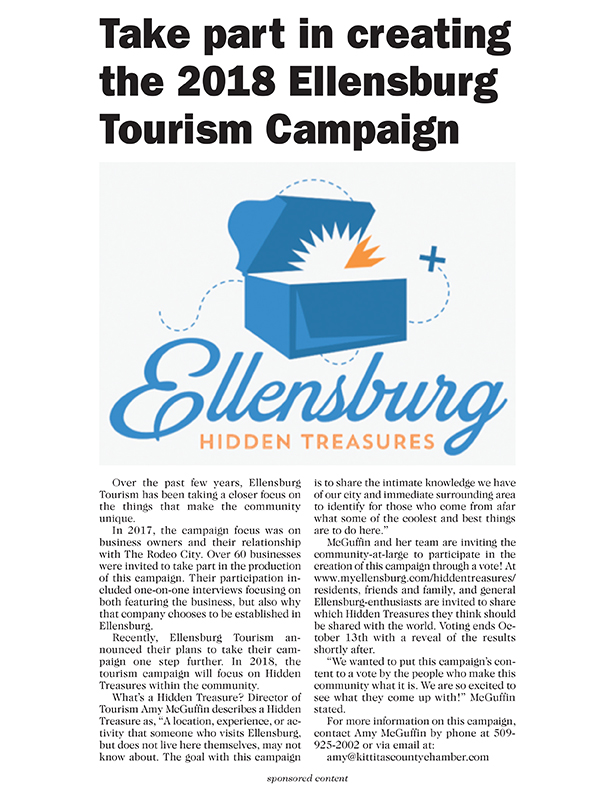 Over the past few years, Ellensburg Tourism has been taking a closer focus on the things that make the community unique.

In 2017, the campaign focus was on business owners and their relationship with The Rodeo City. Over 60 businesses were invited to take part in the production of this campaign. Their participation included one-on-one interviews focusing on both featuring the business, but also why that company chooses to be established in Ellensburg.

Recently, Ellensburg Tourism announced their plans to take their campaign one step further.

In 2018, the tourism campaign will focus on Hidden Treasures within the community.

Director of Tourism Amy McGuffin describes a Hidden Treasure as, “A location, experience, or activity that someone who visits Ellensburg, but does not live here themselves, may not know about. The goal with this campaign is to share the intimate knowledge we have of our city and immediate surrounding area to identify for those who come from afar what some of the coolest and best things are to do here.”

McGuffin and her team are inviting the community-at-large to participate in the creation of this campaign through a vote!

At www.myellensburg.com/hiddentreasures/ residents, friends and family, and general Ellensburg-enthusiasts are invited to share which Hidden Treasures they think should be shared with the world. Voting ends October 13th with a reveal of the results shortly after. “We wanted to put this campaign’s content to a vote by the people who make this community what it is. We are so excited to see what they come up with!” McGuffin stated.

For more information on this campaign, contact Amy McGuffin by phone at *509-925-2002 or via email at: amy@kittitascountychamber.com

* please note the corrected phone number shown here. We apologize that this was caught regrettably after the print version went to press.

Thousands show up at hearing on proposed state gun laws

Picking a location for a new airport, other aviation issues before lawmakers