Halfway through his first legislative session Rep. Ybarra plans to run for re-election 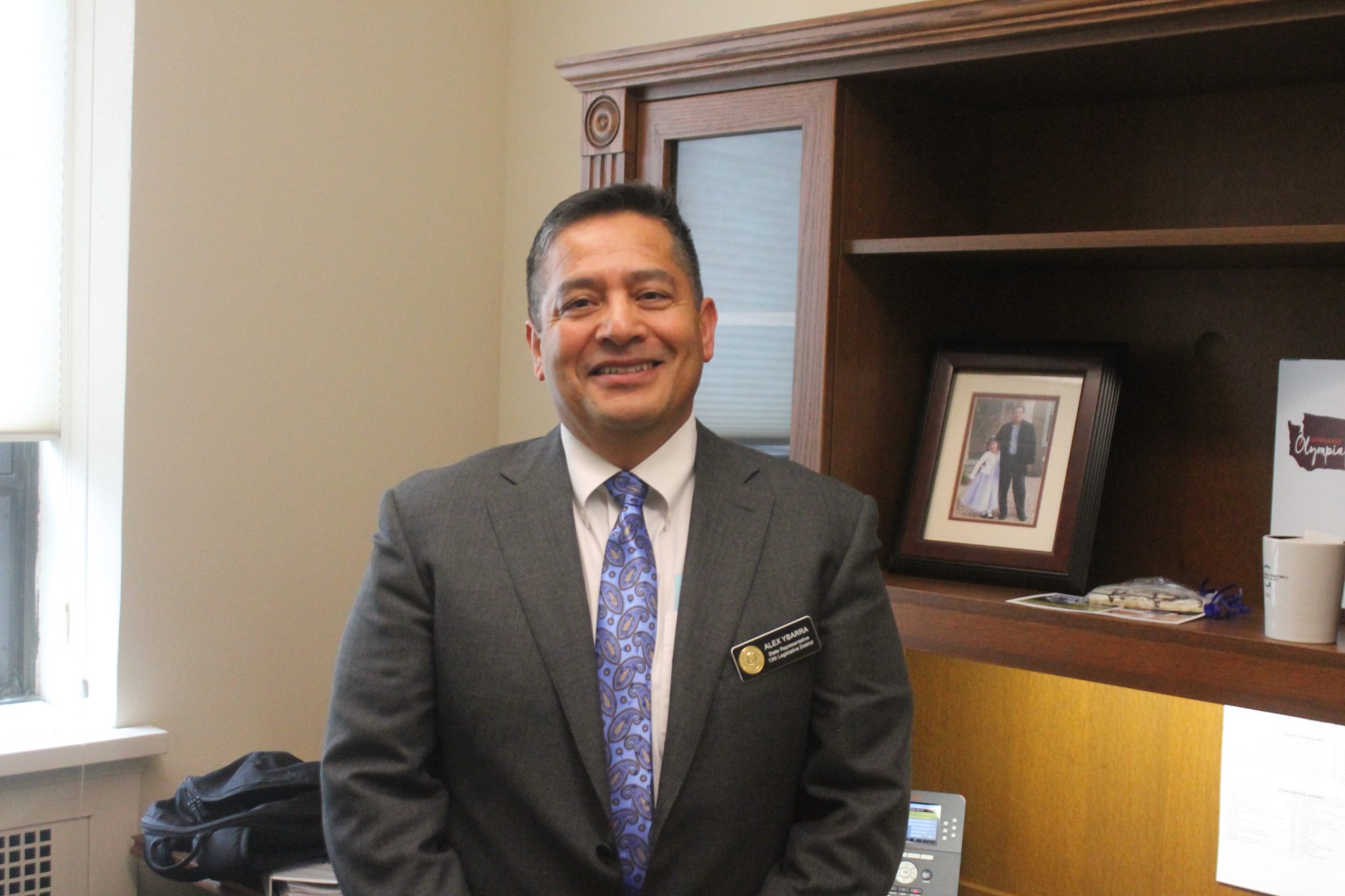 Rep. Alex Ybarra describes his time so far in the Washington State Legislature as a whirlwind.

Ybarra was appointed to the Washington House of Representatives in January to fill the vacancy in District 13 left by the resignation of former Rep. Matt Manweller. Just a few hours after his appointment, Ybarra was on the house floor in Olympia experiencing his first day as a legislator.

Without much notice, Ybarra stayed with a friend near Olympia for the first few weeks of the session, working out of his still-empty office, attending his first committee meetings and adjusting his new role as a representative.

“I feel better because the first couple weeks was just a whirlwind and I was just trying to keep my feet on the ground, trying to figure out what the process was,” said Ybarra.

With the first half of the session behind him, Ybarra has started to figure out how things work at the legislature.

“I know where everything’s at. I know how the process kind of works, generally, and so what I can do now is really concentrate on those bills and concentrate on making a change, for the better, for all of us in District 13,” Ybarra said.

The first bill with Ybarra as the prime sponsor passed unanimously through the House, on March 6. HB 1621 reduces requirements for applicants to teacher preparation programs.

Ybarra got two firsts in one, making his one of his first floor speeches in support of the bill. “It doesn’t get much better than that,” said Ybarra, of passing his first bill unanimously.

“Obviously, my bill that passed was pretty important for all of the towns in central Washington because lots of us don’t have enough teachers,” said Ybarra. “And so what we are doing is getting folks that have degrees and putting them in the classroom because there isn’t anybody else.”

Ybarra is still deciding if he will continue serving on the Quincy School Board throughout his time as a legislator, but says the school district has been amazing in giving him leeway throughout the process. Ultimately, it’s about what’s best for the district as a whole, said Ybarra.

Ybarra’s experience on the school board has pushed him to focus on education policy. He serves on the education and appropriations committees that are both looking at the funding of basin education in light of the so-called “McCleary fix,” among other education issues.

President of the Quincy School Board, Susan Lybbert, cites Ybarra’s passion as key to the work he has been able to do in education.

“He is a great champion for causes and making sure that people’s voices are heard,” said Lybbert.

Ybarra had a huge influence on passing the 2016 bond by working to inform the public of what was happening in the process and what the money would mean for the district, said Lybbert.

Lybbert touted Ybarra’s leadership style as data driven. He looks at the data involved in making decisions and the data to make sure these policy changes are continuing to be what’s best for students, said Lybbert.

Special education and insurance for school employees are big focuses for Ybarra and the committees he serves on this session. During this long legislative session, the legislature must pass a budget for the next two years and appropriations is a key committee for funding legislative priorities.

However, Ybarra doesn’t want to fund those priorities by raising taxes.

Ybarra has plans to run to keep his seat this November. Representatives who are appointed and want to keep their seat are required to run in the next general election.

“I think I can make a difference for our district,” said Ybarra on his decision to run.

During the interim, he plans to visit “every square inch” of his district to meet as many people as he can.  He is also working on legislative goals, if he is elected to serve another session.

When asked about his popularity in District 13, Ybarra was surprised but attributes it to his work in education.

Ybarra hopes to propose legislation that would clean up language regarding county auditors, after a lawsuit regarding a Moses Lake School District bond delayed the projects funded by the bond. Cleaning up the language with regard to  elections would make sure “there are no if, ands, or buts,” about what the auditor is supposed to be doing during election times, said Ybarra.

When Ybarra is not in Olympia, he works for the Grant County PUD. He has worked on various conservation and carbon emissions projects for the PUD over the last 15 years.

When Governor  Jay Inslee came out with his 100 percent clean proposal, it wasn’t something Ybarra said he would call a true statement. It’s something that isn’t possible with current technologies, said Ybarra.

“The technology is not there yet and so we can’t do it yet,” said Ybarra.

He is supportive of pieces of the governor’s clean energy plan, but considers District 13 to already be a leader in renewable energy with dams, wind, and solar power.

“I think for where we live, we’ve got plenty of renewable energy,” said Ybarra.

Washington is “one of the cleanest states in the nation”when it comes to renewable energy,  according to Ybarra. He called the governor’s plan “too much of a good thing.”

Ybarra’s perspective on the legislature and legislators has changed since he became a part of it.

“I think that everybody here is trying to do what’s best for their constituents and the State of Washington but everybody has different ideas of what that is,” said Ybarra.

This is not something he believed before coming to Olympia, but learning more about the intricacies of how our democracy works, Ybarra says, he better understands the need for compromise.

Ybarra and District 13’s other Rep. Tom Dent, R-Moses Lake, along with Sen. Judy Warnick, R-Moses Lake, will be holding a town hall event in Moses Lake at 3 p.m. on March 23.

The event will be held in the Big Bend Community College ATEC Building, located at 7662 Chanute St. NE.

Ybarra is nervously anticipating his first town hall and meeting his constituents.

“I think, at the end of the day, I’m just planning on telling them how it’s been going up here,” said Ybarra. “It’s exciting and scary.”

Dent has enjoyed working with Ybarra so far, this session, calling Ybarra an “intelligent guy.”

“I want to know what’s on your minds,” said Dent on the upcoming town hall. Often people read things about the session or see a headline and don’t fully understand how legislation will impact their lives, said Dent, who hopes to answer constituent questions at the town hall.

His biggest advice for Ybarra ahead of his first town hall was simple, “Engage with the people.”

With the end of Ybarra’s first session in sight, he is looking forward to heading back home.

“I know that the session will be over in about six weeks and I can go back to my, what used to be a regular life, now I have even more fun than I had before- this has been a lot of fun,” said Ybarra.

Did COVID-19 Force You Into A Career Change? Here Are 5 Tips