OLYMPIA – Initial claims for unemployment benefits remained at historical highs for the week of March 29-April 4, with over 170,063 initial claims filed during the week, according to the Employment Security Department (ESD). Although this was a 6.5 percent decrease over the previous week, the number of initial claims filed was a 2,627 percent increase year over year and seven times more than the peak week during the 2008/2009 recession which saw 26,075 weekly initial claims.

During the week of March 29-April 4 ESD paid out $79.4 million to 182,315 individuals across Washington state. In total since the week ending March 16th, the first big week of claims related to COVID-19 job losses, ESD has paid out nearly $150 million in benefits to Washingtonians.

“It remains critical that people stay home and stay healthy, that is paramount. The increased utilization of unemployment insurance across the state demonstrates that more and more people are abiding by this order. Although the number of initial claims is down slightly from last week, we need to be cautious that this does not yet depict a trend,” said Employment Security Commissioner Suzi LeVine.  “As our ESD team works round the clock to make it easier for Washingtonians to apply for unemployment benefits in addition to implementing the new federal Pandemic Unemployment Assistance Program which will increase the number of workers who are eligible for unemployment benefits, we expect to see a new surge of claims in the coming weeks.”

Below is a five-week summary of statewide initial claims filed since the start of the COVID-19 crisis:

*This number was revised downward from 133,464 to 128,962 by the U.S. Department of Labor.
** Initial claims include claims that are still being reviewed for eligibility. Counts for initial claims are not indicative of the number of claims that will result in monetary compensation 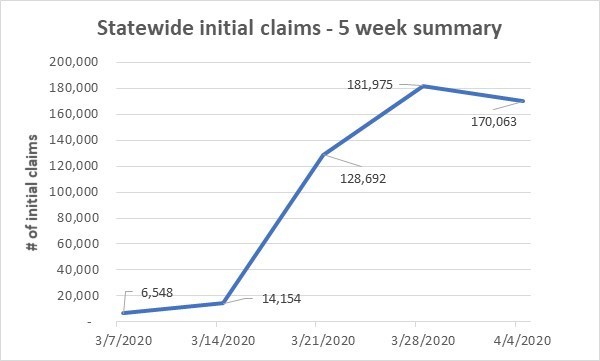 Industry sectors experiencing the highest number of initial claims during March 29 – April 4 were:

King County the most populous in the state and one that had already experienced a rise in claims the prior two weeks, saw initial claims increase from 44,613 to 47,233 during the week of March 29 – April 4th, up 6 percent from the week before.

Other counties experiencing the largest increases in initial claims over the previous week were:

NOTE: ESD will send out the next weekly new claims press release on Thursday, April 16 at 10 a.m. Pacific Time.

“New claims” include individuals who filed first-time claims as well as additional claims filed by individuals as a result of a new unemployment event. New claims include claims that are still being reviewed for eligibility. Counts for new claims are not indicative of the number of claims that will result in monetary compensation. Counts are estimated due to the unprecedented volume of claims.

Per U.S. Department of Labor regulations, weekly unemployment claims data is embargoed and not available for release until the Thursday following the claim week.

Employment Security is a proud partner in the statewide WorkSource system, which provides employment and training assistance to job seekers and businesses. While WorkSource centers are closed for in-person services during the COVID-19 outbreak, customers can still get help from WorkSource staff by phoneand through the Live Chat feature on WorkSourceWA.com. The website provides access to thousands of Washington jobs and other employment resources. Chat agents cannot answer unemployment benefit questions.