Gun magazines that hold more than ten rounds of ammunition would be outlawed under a proposed law moving through the state Senate.

Supporters cite safety concerns, while opponents argue the measure, which cleared the Senate Committee on Law and Justice on Thursday, Jan. 23, would place new restrictions on Washington residents’ right to bear arms.

SB 6077, sponsored by 14 Democratic senators, would make it illegal to possess what the bill would define as a high-capacity magazine in most instances. Under the proposal, exemptions apply to people who already own the magazines, though use is restricted. There would also be exemptions for law enforcement, the military, licensed gun dealers, and other firearm professionals.

“Today, our children are forced to prepare with active shooter drills for the very real possibility of gun violence occurring in their classrooms and, sadly, students are attending their classmates’ funerals,” said Sen. Patty Kuderer, D-Bellevue, the bill’s primary sponsor.

The bill defines “high-capacity magazine” as any ammunition-feeding device with the ability to hold more than 10 rounds, while acknowledging that some states with similar bans allow magazines that hold 15 bullets.

Ami Strahan, whose son died in a school shooting, testified in support of the bill at the Law and Justice Committee hearing on Monday, Jan. 20. Her son, Sam Strahan, was killed by a school mate in 2017 at Freeman High School in Rockford near Spokane.

“While I find myself saying thank goodness he was the only one, I also can’t fathom that that sentence has become acceptable in 2020,” Strahan said. “When did it become okay that one kid died at school?”

“High-capacity magazines are exceptionally lethal,” said Dr. Fred Rivara, a pediatrician and professor of pediatrics and epidemiology at the University of Washington. “They increase the fatality of any firearm to which they are attached.” Rivara says that people with multiple gunshot wounds rarely survive.

Opponents to the bill say a ban on high-capacity magazines would put their ability to defend themselves at risk.

“It’s a woman’s right to own firearms for personal protection because it levels the fight,” said Jane Milhans, a certified firearms instructor and who said she was a survivor of a home invasion. “In a personal defense situation, it may take more than 10 rounds to stop a threat. Should it take more, this bill puts women at a dangerous risk of being defenseless.”

In the committee’s hearing on Thursday, Jan. 23, Republican lawmakers expressed their concern for the direction Washington state would be taking in the event that this bill is passed.

Some argued that the true problem, which lawmakers fail to address and prioritize with this bill, is mental health.

“We seemed to have evolved into a situation in society here to where the mental health issues underlying the people wanting to engage whether they have one bullet or two bullets or 100 bullets out there becomes the issue,” Sen. Jeff Holy, R-Cheney, said.

On Friday, Jan. 24, the bill was passed to the Rules Committee for a second hearing. 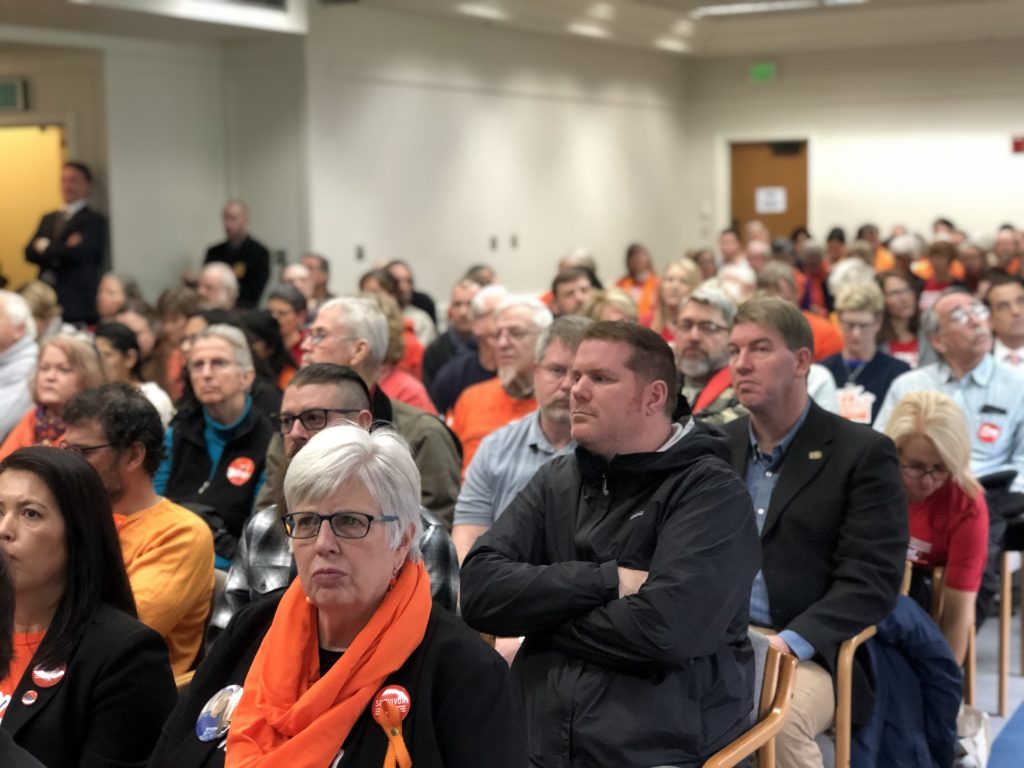 Washington residents at a Senate Law and Justice Committee hearing on a proposed ban on high capacity gun magazines this week. Many wore orange in support of gun safety. — Photo by Leona Vaughn, WNPA News Service