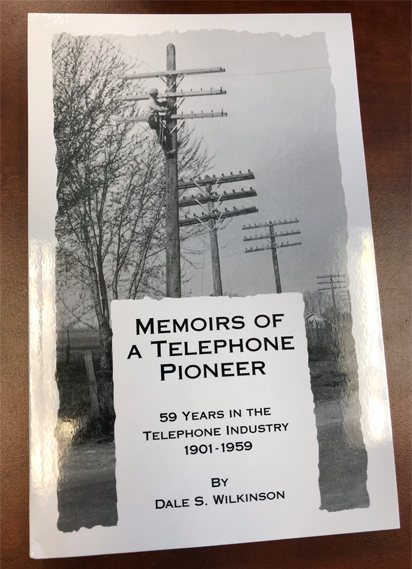 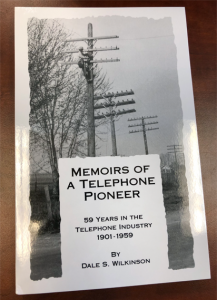 (Originally published in the July 5, 2018 print edition of the Northern Kittitas County Tribune. Republished here courtesy of support from KittitasBooks.com)

CLE ELUM – The Telephone Museum on 1st St. in Cle Elum is offering a new book. Proceeds help operate and maintain the facility. Northern Kittitas County Historical Society treasurer Charlene Kauzlarich spearheaded the project.
“The book, Memoirs of a Telephone Pioneer,” was written by Dale Wilkinson as an autobiography of his life.
“From 1908 to 1910 he managed Pacific Telephone and Telegraph Company’s Yakima office, the same company through which the Cle Elum exchange operated.
“His descendants contacted me and offered to let the museum have his typewritten memories. I thought the best thing to do would be to self publish the book, so I helped them with that.”
She said Wilkinson’s descendants are great-granddaughter Daylin Baker, and granddaughters Louise and Alda Wilkinson.
Said Kauzlarich, “Daylin once owned Roslyn’s NWI Building in Roslyn.”

How the project started 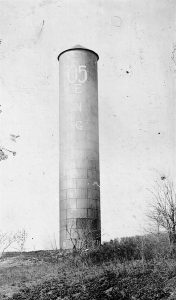 WILKINSON scaled this water tower in 1906 when he was a freshman at the University of Kansas. The prank: He hung over the side and painted his school year, “O5.” The tower was 20-feet in diameter, 105-feet high. Courtesy Wilkinson Family 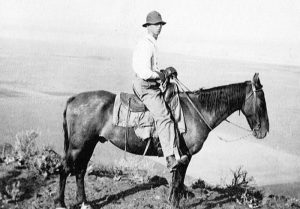 DALE WILKINSON on a horse, back in the day when you didn’t have the luxury of jumping in a car or truck to get to a job. Courtesy Wilkinson Family

As Kauzlarich tells it, “Back in January, Daylin sent me an e-mail to tell me she was interested in donating a copy of her great grandfather’s memoirs. It was 108 pages, typewritten and single-spaced. He wrote it in 1970.
“I thought, wow, there is no way a museum visitor would take the time to leaf through the manuscript, but as I read it, I became more and more interested. I thought this would be better in a book and we could sell to raise money for the museum.”
Kauzlarich said she discussed the idea with Daylin. After Daylin presented the idea to her family, the decision was made to move forward with the project.
“They arranged a time to bring me 35 photographs to go with the manuscript. We did several back-and-forths before it went to press. I must have read and re-typed the manuscript 400 times,” she laughed.
She said Wilkinson did in fact visit Cle Elum.
“After he retired, he made a trip here in September 1966. He was invited by company executives to witness the change to automatic dialing.”
She said that was his only connection to the Upper County.
“On that note, though this isn’t a local history book, Wilkinson did a wonderful job tying his life to the period in which he lived and worked.
“The first telephone was patented in 1876. He got involved in the telephone industry in 1901, when it turned 25 years of age. He worked in the industry from that point another 60 years.”
She said Wilkinson worked in San Francisco getting that city’s telephone system set up just before the earthquake of 1906.
“He heard Roosevelt talk at the Alamo.
“He was managing the White Bluff Telephone Company in the 1930s. He thought it would grow because they were building the Priest Rapids Dam. With the dam finished there would follow a big demand for homes and phones.
“But then WWII hit and in 1943 the feds bought out White Bluff and started the Hanford Project (Manhattan Project). Nobody knew what the government was doing.
“Later, Wilkinson was the one who installed phones at the Desert Inn in Richland, where the feds announced America had dropped the atomic bomb in Hiroshima.”

“I am so grateful to my daughter, Daylin, for being alert to the possible value of my grandfather’s memoirs to the Telephone Museum in Cle Elum.
“I am equally grateful to Charlene Kauzlarich for recognizing the value and making a major investment of time, care and professional work to get this published.
“I am glad this project prompted me to reread the memoirs, and I am very impressed with my grandfather’s recollections and straight-forward presentation of his childhood world, his work life, and his involvement in the community and industry development going on in Eastern Washington in the early 20th century.
“I feel honored to have the family name represented in his tireless commitment to making fledgling phone systems work despite major challenges.
“His stories demonstrate his resourcefulness, mechanical abilities, project management skills balancing big picture and fine detail, and his continued collaboration with lifelong partners.
“I’m amazed by his unbelievably detailed memory. He must have kept a journal.
“I hope that somehow he knows that all his work will now be appreciated by those who love the telephone industry as he did.”

“The inspiration and visionary behind the sharing of our grandfather’s memoirs is his great granddaughter Daylin Baker.
“As a granddaughter, I read my grandfather’s memoirs many years ago when he wrote them for us, but I had long forgotten the details.
“It came as something of a surprise when Daylin resurrected them and shared them with us, as well as with the Telephone Museum in Cle Elum.
“It was with new interest and enthusiasm that I read them again and realized that others, indeed, found them valuable.
“It is a special pleasure to see our grandfather’s memoirs in published book form and available as a true first person account of telephone pioneering days in eastern Washington.”

“I was named after my great-grandfather – Dale feminized to Daylin – though I was born after he passed away. So I have always had a bit of curiosity about him.
“My mother had given me Dale’s typed memoirs many years ago when I had volunteered to convert them to a digital format that could be shared with the entire family.
“A couple of years ago I finally got around to doing that and I had shared a few snippets with my husband about what I was seeing in the conversion process.
“I was chatting with my husband one day earlier this year about something that prompted him to say, ‘Didn’t your great-grandfather help start the phone company out here?’
“I knew that wasn’t quite right, so I went looking at the memoirs again to better understand his role.
“While reading again about his purchase of a small phone service center in eastern Washington, I remembered there was a Telephone Museum in Cle Elum, as I had seen it often when I lived in Roslyn some years before. I wondered if they would have any interest in the memoirs, so I searched for contact information online and Charlene Kauzlarich responded to my e-mail immediately.
“Her enthusiasm is really what made all of this happen, and we are so grateful that she saw the potential in these memoirs and pursued this publication.”

Copies are available M-F / 8-5 (except major holidays) at Tribune Office Supply & Printing, and online 24/7 with a visit to KittitasBooks.com.

More about the book

Wilkinson’s memoirs reveal a fascinating look into his life story and an in-depth, well written historical record of the early days of the American telephone industry.
His story spanned historic times in America – the Spanish-American War, First and Second World Wars, Prohibition, the Great Depression, and Korean War.
He worked alongside veterans of the Civil War, was present at the Alamo to hear President Teddy Roosevelt speak, and lived in San Francisco when the earthquake struck in 1906.
Stagecoach lines and travel by horse and wagon were commonplace during his early career.
He directed telephone operations throughout the Northwest including Boise, Butte, Portland, Tacoma, Yakima, and White Bluffs (Hanford) where he became intimately involved with the Manhattan Project in 1943 as well as the development of the Priest Rapids Dam.
Wilkinson recounts his life story, 59 years of it in the telephone industry, in remarkable detail, and with a dry humor and wit that keeps readers captivated until the very end.
SOURCE: Northern Kittitas County Historical Society. 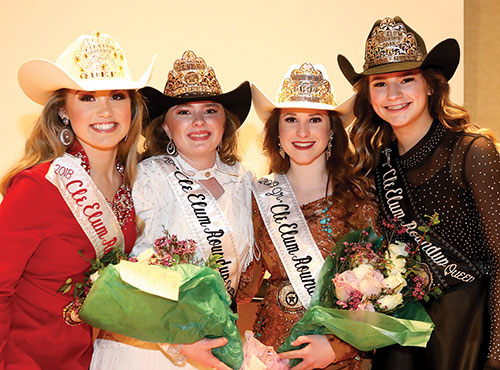 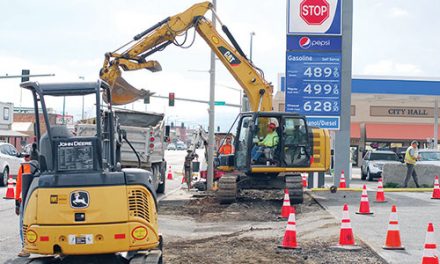 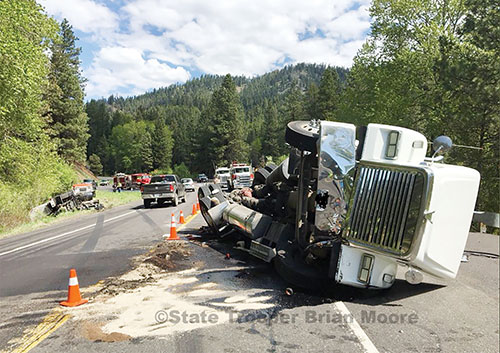 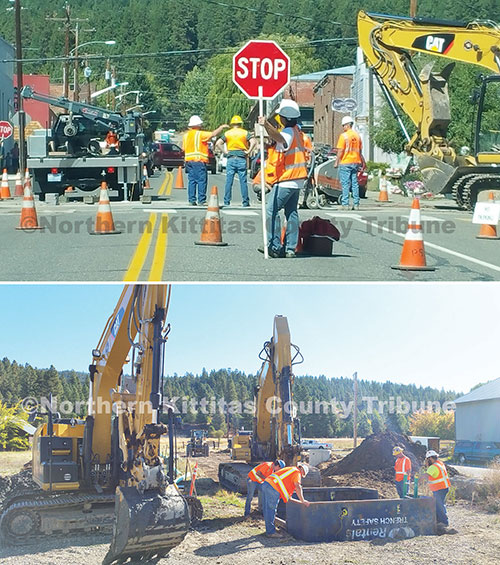 HEADLINES for the Week of September 17, 2015-Northern Kittitas County Tribune.