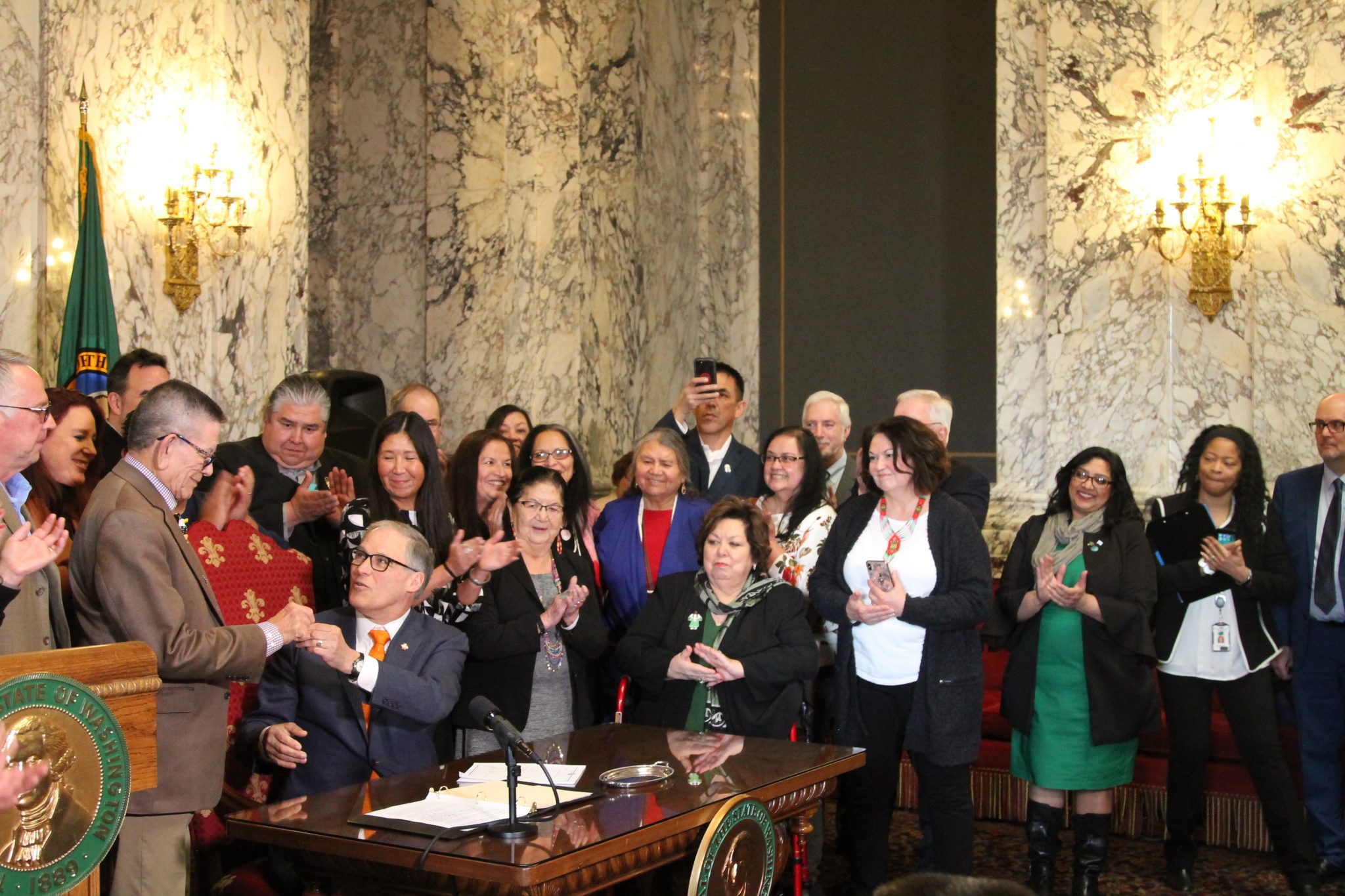 Governor Jay Inlsee signs into law the second bill to be passed by the Legislature this session. The Native American Voting Rights Act allows the use of non-traditional address to be used for voter registration for residents who live on Indian reservations. – Photo by Emma Epperly, WNPA Olympia News Bureau

“We believe these three steps will allow tribal members to help us form a more perfect union and make good decisions about our destiny,” said Inslee of the changes the bill makes.

The state House of Representatives passed an amended version of the bill with a 95-3 vote on March 5. House members voting against were Reps. Bob McCaslin, R- Spokane Valley, Ed Orcutt, R-Kalama, and Matt Shea. R-Spokane Valley.

The bill passed the Senate on Feb. 6 with 34 in favor, 13 opposed, and two excused. All 13 senators in opposition were Republicans; however, Minority Leader Mark Schoesler, R- Ritzville, and other Republicans voted in support.

“This legislation provides us the opportunity to remove those barriers to be able to call to the Native Americans and tell them they matter,” said Rep. Debra Lekanoff, D-Bow. Lekanoff is the first Native American woman elected to the House and previously worked for the Swinomish Indian Tribal Community.

“The excitement of an aunty going down to pick up her ballot with her little granddaughter and going to the kitchen table and filling it out and walking just another half a block and dropping it in a dropbox, on the reservation, in the middle of our America is wonderful for me,” said Lekanoff.

“We welcome everyone to participate in our electoral process,” said Rep. Jim Walsh, R-Aberdeen in support of the bill.

The passed amendment, proposed by Walsh, requires that a tribe’s ballot box must be accessible to the county auditor via a public road.

The Native American Voting Rights Act would allow the residential address portion of a voter registration form to be filled out with a nontraditional address.

The bill modifies the minimum information required for voter registration under state law, to allow for “unmarked homes” and “a nontraditional residential address may be used when a voter resides on an Indian reservation or on Indian lands.”

The bill also allows for voters to list a building designated by the tribe in their precinct as their residential address, if need be.

The House State Government and Tribal Relations Committee amended the bill to let tribes choose a building, which is not a ballot pick-up location, to be used for mailing address purposes only. The amendment made other minor changes.

The underlying bill modifies the minimum information required for voter registration under state law to allow for “unmarked homes” and “a nontraditional residential address may be used when a voter resides on an Indian reservation or on Indian lands.”

With Inslee’s signature of the bill, the Native American Voting Rights Acts was the second bill signed into law in the 2019 session.