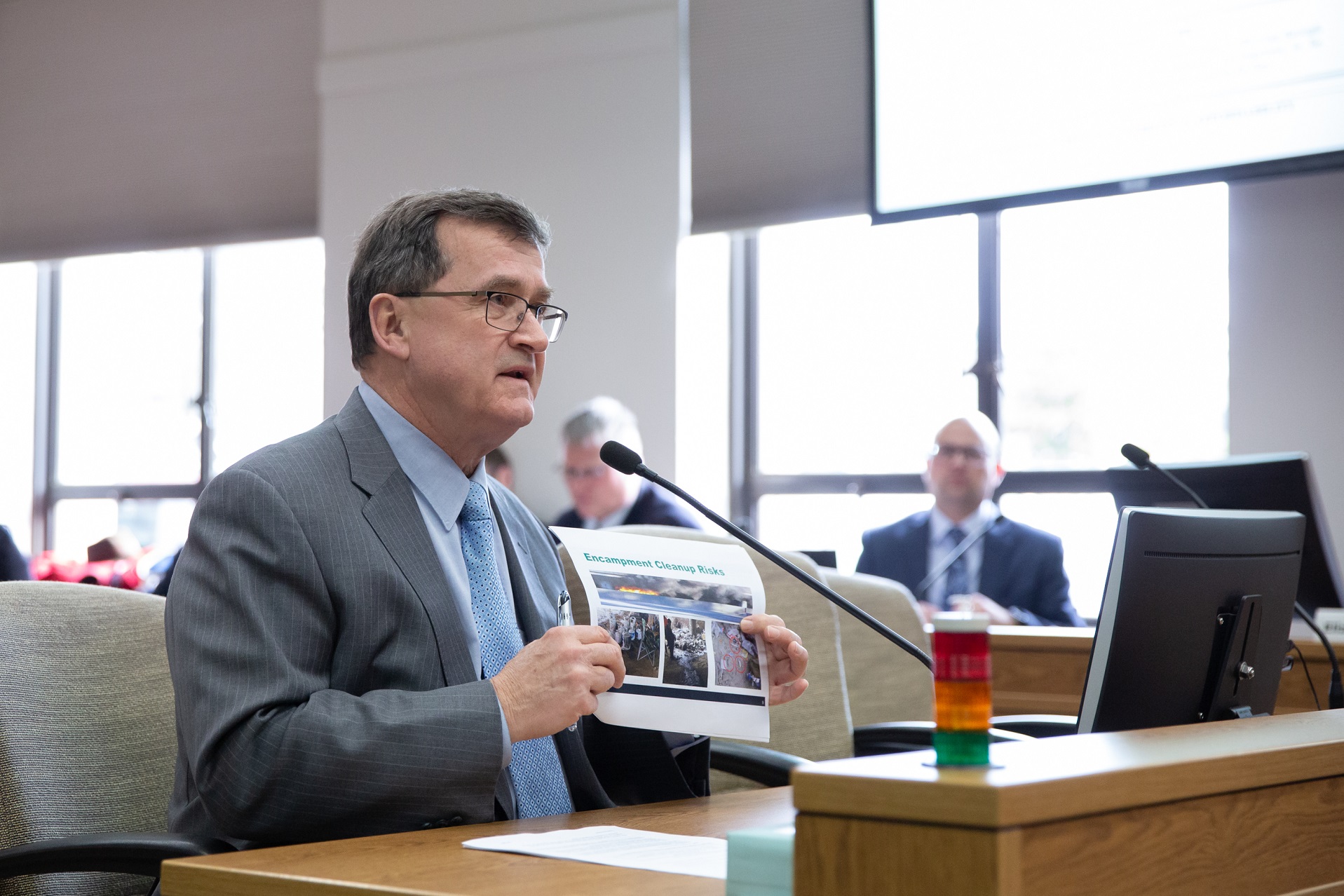 Senator Curtis King, R-Yakima, testifies in support of Senate Bill 5882, which he is prime sponsor, at the Senate Housing Stability & Affordability Committee Monday. If it becomes law, the legislation would prohibit municipalities from sanctioning homeless encampments that are within 1,000 feet of a school or early learning facility. – Photo by Legislative Support Services Photography Department

OLYMPIA – A bipartisan bill introduced in the Washington Senate would ban homeless camps near schools and daycares.

Senate Bill 5882, sponsored by Sen. Curtis King, R-Yakima, would make it illegal for cities, towns and other municipalities to authorize, even through inaction, homeless encampments within 1,000 feet of a school or early learning facility.

“We have laws in this state that say you can’t have a marijuana store or liquor store within 1,000 feet of a school,” said King in a written statement. “Homeless camps near schools put students in greater harm than marijuana or alcohol. Why should we allow that to happen? It puts the safety of students and teachers at risk.”

At the bill’s public hearing on Monday, King described images he was shown of human waste leaking out of bags, and said he talked to workers describing how they carried away 5-gallon cans of needles from homeless camps. He also said that some of the encampments’ residents could be pedophiles, sex offenders, mentally ill, or high on drugs.

Michelle Thomas of the Washington Low Income Housing Alliance said that cities who support encampments should be “applauded,” because they not only offer residents safety, but also access to services and housing.

The proposed bill, “is all based on false notions that everybody experiencing unsheltered homelessness is dangerous,” she said.  “In order to solve homelessness, we have to stop criminalizing and stigmatizing people.”

Another Republican senator agreed with the need to offer services to homeless individuals, but disagreed that they should be sanctioned near schools.

“So when various cities go in to clean up an encampment, they’re pulling up hundreds of needles and all this other stuff. So yes we can address those issues. Yes, we should address those issues. Yes we should provide a stabilizer for all the things that you just said,” said Sen. Phil Fortunato, R-Auburn. “We just should be doing it three blocks away. That’s all we’re saying.”

“I always cringe when somebody says, ‘well this is kind of a common sense bill,’” King said. “But in some sense, I think it is.”

“It’s not strangers coming out of the woods to, like, kidnap a kid or something like that.” said Xochitl Maykovich with the Washington Community Action Network. “So I think that we should really base legislation on facts and data and not on stereotypes.”