OLYMPIA – During the week of October 25 – 31, there were 14,681 initial regular unemployment claims (up 3.4 percent from the prior week) and 465,563 total claims for all unemployment benefit categories (down 2.1 percent from the prior week) filed by Washingtonians, according to the Employment Security Department (ESD). Since the crisis began in March, ESD has paid more than $12.1 billion in benefits to over a million Washingtonians.

Slight increases in initial claims were primarily in industries where seasonal layoffs are expected this time of year, including agriculture and construction. 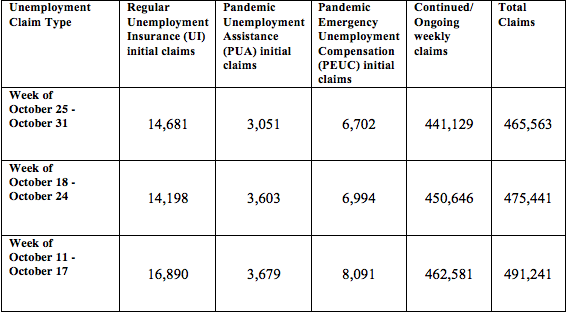 Below is a thirty-five week summary of statewide initial claims filed since the start of the COVID-19 crisis:

By county
King County, the most populous county in the state, saw initial regular claims decrease from 3,552 to 3,382 during the week of October 25- October 31, down 5 percent from the week before.

Other counties with the largest number of initial claims during the week were:

For employers looking to avoid layoffs or slowly ramp up re-hiring during this crisis, SharedWork is a great program that can help. You can learn more at esd.wa.gov/SharedWork.

ESD will send out the next weekly new claims press release on Thursday, November 12 2020 at 10 a.m. Pacific Time.