The Orion Nebula: Window Into a Stellar Nursery

NATIONAL – Winter begins in December for observers in the Northern Hemisphere, bringing cold nights and the return of one of the most famous constellations to our early evening skies: Orion the Hunter!

Orion is a striking pattern of stars and is one of the few constellations whose pattern is repeated almost unchanged in the star stories of cultures around the world. Below the three bright stars of Orion’s Belt lies his sword, where you can find the famous Orion Nebula, also known as M42. The nebula is visible to our unaided eyes in even moderately light-polluted skies as a fuzzy “star” in the middle of Orion’s Sword. M42 is about 20 light years across, which helps with its visibility since it’s roughly 1,344 light years away! Baby stars, including the famous “Trapezium” cluster, are found inside the nebula’s whirling gas clouds. These gas clouds also hide “protostars” from view: objects in the process of becoming stars, but that have not yet achieved fusion at their core.

The Orion Nebula is a small window into a vastly larger area of star formation centered around the constellation of Orion itself. NASA’s Great Observatories, space telescopes like Hubble, Spitzer, Compton, and Chandra, studied this area in wavelengths we can’t see with our earthbound eyes, revealing the entire constellation alight with star birth, not just the comparatively tiny area of the nebula. Why then can we only see the nebula? M42 contains hot young stars whose stellar winds blew away their cocoons of gas after their “birth,” the moment when they begin to fuse hydrogen into helium. Those gas clouds, which block visible light, were cleared away just enough to give us a peek inside at these young stars. The rest of the complex remains hidden to human eyes, but not to advanced space-based telescopes.

We put telescopes in orbit to get above the interference of our atmosphere, which absorbs many wavelengths of light. Infrared space telescopes, such as Spitzer and the upcoming James Webb Space Telescope, detect longer wavelengths of light that allow them to see through the dust clouds in Orion, revealing hidden stars and cloud structures. It’s similar to the infrared goggles firefighters wear to see through smoke from burning buildings and wildfires.

Learn more about how astronomers combine observations made at different wavelengths with the Night Sky Network activity, ‘The Universe in a Different Light,” downloadable from bit.ly/different-light-nsn. You can find more stunning science and images from NASA’s Great Observatories at nasa.gov. 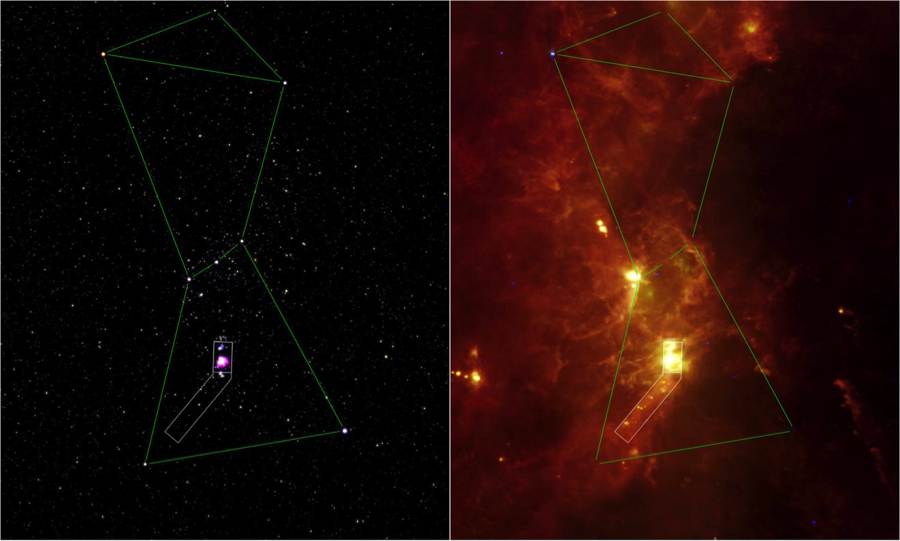 This image from NASA’s Spitzer missions shows Orion in a different light – quite literally! Note the small outline of the Orion Nebula region in the visible light image on the left, versus the massive amount of activity shown in the infrared image of the same region on the right.

Two Months In, COVID-19 Impacting Lives of People with Disabilities