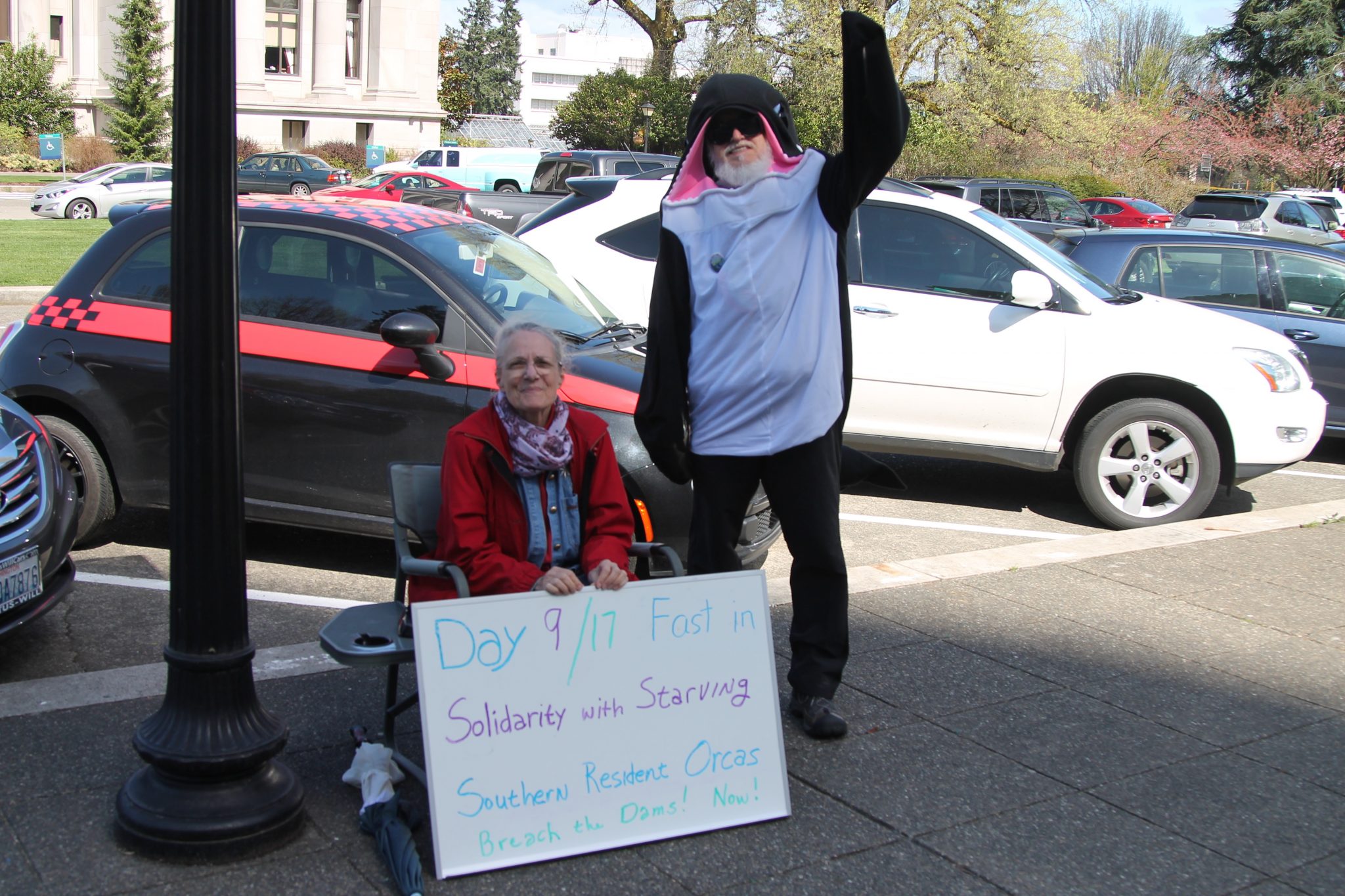 Lanni Johnson breaks her 17-day fast with an orange on Wednesday. She is joined by supporters including Phil Myers from the North Olympic Orca Pod activist group dressed in an orca suit. – Photo by Emma Emperly, WNPA Olympia News Bureau

OLYMPIA — Lanni Johnson, 71, tearfully completed her 17-day hunger strike Wednesday as she took the first bites of an orange, her first food in more than two weeks.

“It was worth it,” said Johnson, wiping away tears as she continued to eat.

Johnson began her hunger strike April 1 and sat in front of the Washington State Capitol building for approximately 7 hours each day with a sign that read, “Solidarity with starving Southern Resident Orcas. Breach the Dams! Now!”

Johnson chose the length of her strike to equal the length of time that Tahlequah, a mother orca, carried her dead calf in July 2018.

“I don’t know how much she was able to eat while she had that baby on her nose,” said Johnson. “So, I thought if she could do that, then I could do this.”

The calf was the first to be born in the pod  since 2015 and lived for less than an hour. National media outlets picked up the story and followed Tahlequah as she carried her dead calf around the Puget Sound region.

With all the attention on the southern resident orcas, the state Legislature created an Orca Task Force in March 2018.

Johnson is tired of being ignored, which she says is one of the reasons she decided to launch her hunger strike.

“Maybe if I could manifest hunger where people could see it and appreciate what it does to a person,” said Johnson. “I mean we’re all mammals, right? They’re experiencing what I’m experiencing, right now. I’m very weak.”

Johnson was not alone in her effort to bring attention to the plight of the orcas.

Members of the North Olympic Orca Pod activist group rallied April 12 to encourage legislators, the governor and members of  Congress to speak out in favor of breaching the four lower Snake River dams.

There are currently 75 orcas in the region. The group put up a “ghost fin” display showing the 35 orcas that have died since 2005.

Activists Michelle and Miguel Seidelman created a display of orca cutouts representing the remaining Southern Resident Orcas and identifying them by name.

Members of the Palouse Tribe joined the Friday protest led by tribal elder, Carrie Chapman-Schuster, who said she was forcibly removed from her land in 1959 for the lower Snake River dams to be built.

“They’re not hearing the message of the orcas that they need their salmon,” said Chapman-Schuster. “We’ve got to take those dams down because those were the biggest beds where the salmon were and that’s the reason we had all the prosperity in our fish.”

Johnson estimates she lost 25 pounds during the strike and will have to slowly add different foods back into her diet.

Johnson says she doesn’t know what she will do next but does not want to lose the momentum she has built over the last 17 days. Still, her immediate goal is to enjoy some pizza and beer in the next week.