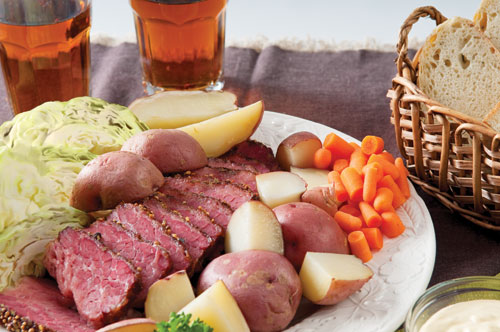 Chef Frank has posted his recipe, compete with tons of pro chef tips, for a traditional Corned Beef and Cabbage dinner for your St. Paddy’s day celebrations. See Recipe below 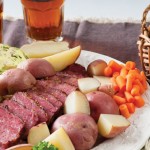 Chef Frank Tips
Low Sodium - If you want the corned beef to be less salty, then every hour, completely drain off all the liquid and add fresh hot water. You’ll need to add the herbs & spices from my list above.
Never let the roast dry out. If for some bizarre reason your roast is dry, you can add slices to the liquid in the bottom of the roasting pan for a few minutes. Some folks like to add a splash of the cooking liquid over the sliced beef as the plates are served.
On the Side – try different types of whole grain mustards (the one’s with the whole seeds in them). Horseradish cream sauce is my fave: 1 cup of sour cream and ¼ cup prepared hot horseradish, a shake of granulated garlic and white pepper. Want it hot? Go 50/50 sour cream and horsey.
Stove Top Method – is a last ditch way to “boil” corned beef in a giant pot. It works just ‘ok’, you have to really keep the heat turned down and watch it closely. Many gas stoves cannot be turned down low enough.
Crock Pots – work just dandy for this type of moist-cooking recipe. However, every darn crock pot is different. So that makes it difficult to give you an exact cooking time. All I can say is experiment with your crock pot ahead of time.
Which brings me to my “Cooking Golden Rule”: Never experiment with a new recipe on the day you are celebrating. Practice, practice, practice waaaaaaaay ahead of time. Don’t be put in the situation where you are apologizing to your guests “one more hour, really one more and it will be ready...”
(So if today is Saint Patrick’s and you are trying this out, then just set aside all the time you’ll need, make a day of it. Download some wonderful Irish music, grab some Beamish Stout or Guinness. Pick up some Jameson’s Irish whiskey and make some Irish Coffees... muddle a sugar cube with a shot of whiskey in the bottom of a cup, pour in hot coffee and top with fresh made sweetened whipping cream! Please don’t add some green food coloring to a Coors Light... )
The cooking liquid that is in the bottom of the pan – IMHO it is usually just salt water and can’t be used for anything except in small amounts. I will add some to the water if you boil your cabbage or vegetables. Some will add a splash of it to their mashed potatoes (or Colcannon – see my March 15, 2011 Tribune article...). Others will cook all the cabbage and veggies in it after the roast comes out and is resting. It’s all about the salt content, experiment and see what level you like.
Other Beef Roasts – this is a classic beef roast recipe – this works great for any large roast: regular brisket, chuck, top round, bottom round, ball tip, etc. Cut back on the water, only add just enough to keep the roast steaming with moisture. Spices for a lamb roast: exclude the allspice and cloves then add sprigs of fresh rosemary and dry oregano. I’ll cut small slits into the roast and insert whole cloves of garlic.
More Veggies! Play around with fresh veggies, add lots of root veggies, red and golden beets are a fave. Try fennel bulbs, add different onions like cipollini or leeks... add tons of garlic and instead of cabbage try other greens like spinach, kale, Swiss chard, mustard, beet & turnip greens... Add summer or winter squash varieties, bell peppers and hot chili peppers, these are all great choices!
To all cooks
Write to me if you have other recipes, cooking tips & tricks. I love to hear your cooking stories, successes... and failures. Drop me an email and tell me some?
frank@nkctribune.com/tribune

Tasty ways to Iron Up your diet