It is with a heavy heart that the Tribune staff has to report some very sad news of our own. The Tribune family has lost a cherished member in the form of our Greeter Cat “Buddy Davis”, the familiar orange tabby dubbed the “H.R. Director” of the Tribune for the past nine years.

On Tuesday, Oct. 2, Buddy passed over the Rainbow Bridge following a valiant refusal to give in to failing kidneys. Every time in recent years his long time vet, Dr. Val Hedrick, would say he was showing signs of being a “geriatric cat,” Buddy would return and prove his predator’s prowess, presenting us with yet another conquered rodent or lizard as if to say, “Who you calling geriatric?” Yes, he brought a stunned live lizard into the Tribune office and set it loose when it awoke, sitting back with a highly satisfied feline grin as we scrambled to capture and relocate the unhappy escaped reptile. That was an exciting day. Not your everyday professional office life for sure. One of many adventures with a former alley cat turned gainfully employed member of a work family.

How Buddy started out his life is lost in the mists of time, however he was obviously someone’s cat at one point, evidenced by his neutered state, and somewhat friendly, if wary, demeanor when coaxed to a bowl of food or a warm blanket while he was still making his living outdoors.

When the Tribune moved from its previous downtown location to the Davis Street Center by Safeway, the publishers, Jana Stoner and Terry Hamberg, set up shop in the north end of the building, with big floor to ceiling windows. One evening while working at her desk, Hamberg saw out of the corner of her eye a light orangish colored blur flash by her window. What followed next was, “Like a cartoon,” she said, “a kind of rough looking orange tabby cat walked backwards into view and did a double take, peering into the window back at me.” The building had been vacant for a period before the Tribune occupied it. “The look on his face was priceless. ‘Who are you, and what are you doing in there?’ it seemed to say.” He was curious, and returned often to stare in the window at Terry and Jana. Terry began to call him “my little buddy” and the name stuck.

Lori Clemente with ARRF Animal Rescue helped get him connected with feral cat rescuers who take strays to get sterilized and vaccinated before releasing them back where they were found (“TNR”, trap, neuter, release program). That is when it was discovered that Buddy was already neutered, and might have a home with someone missing him. Word was put out in the paper and through ARRF about the stray cat hanging about, but no one came to claim him.

It wasn’t long before staff members were bringing in warming blankets, putting out bowls of food and giving the owners puppy dog eyes, concerned that the little cat was cold and faced traffic and other dangers in his street urchin existence. He moved inside. Buddy had officially adopted the Tribune, it’s staff, customers, community, and random small children passing by who peered in the windows and pointed and giggled with delight at the stripedy orange kitty, now staring out at them from his warm and safe new domain.

Buddy’s days weren’t all soaking up morning sunbeams near the front door, eating premium cat food, napping on desks and laps throughout the building and swatting at the abundance of toys dangled, tossed and, in the case of the laser dot, darted around before him. He had to work for his supper, just like the rest of the team. In addition to his H.R. Duties of screening job applicants, keeping up staff morale and ensuring adequate staff exercise (re-read the lizard story above), Buddy was the Official Greeter, welcoming customers with a friendly headbutt as they approached the front counter. For those who worked in the building, Buddy came to distinguish employee’s vehicle sounds from the myriad of cars entering and leaving the busy parking lot for the complex which includes the high traffic Taco Bell restaurant. He would race to the door and meow as the recognized faces walked up, giving their legs a thorough brush by as he awaited an ear rub.

Since ARRF had helped Buddy, and he was now in a position to return the favor, or “paw it forward” as team members put it when promoting the “Buddy’s Buddies Pet Giving Tree” inviting community members to pick up tags with items from a wish list provided by Clemente for ARRF, and return the donated items to place under the tree, he did so. His Celebrity Cat endorsement brought in literal tons of pet food, treats, beds and toys to help local pets in need through ARRF and Hope Source’s Pet Food Bank over the years. Lori often posed with Buddy by the gift laden tree when it was time to pick up the loot from the community and distribute it in time for Christmas.

Buddy truly touched many lives, and his circle of friends extended far beyond the doors of the news office. Upon receiving the news of Buddy’s passing, Clemente sent sincere condolences, and said, “He was our community cat. I know he meant so much to so many. He was such a character too. I’m so sorry.”

Kind thoughts are pouring in on Facebook as well, including, “He was a great kitty and everyone loved him! He will be greatly missed!” and “Oh Buddy, there are good friends meeting you in kitty heaven. And lots and lots of treats.” The Tribune invites everyone to share memories and thoughts of Buddy (facebook.com/nkctribune). The publishers get the ball rolling with just a few of the volumes worth of memories of the orange stray who charmed his way into their hearts.

Jana Stoner said, “He would greet me at the door in the morning. He liked to follow me around like my ‘purrsonal’ assistant. He would supervise me as I designed the front page of the paper each week. Although actually I was pretty much his personal assistant, cleaning his litter box, taking him to the vet and washing up his food bowls. He was also a life coach, telling me to get up and move around now and then.”

Hamberg reflects, “There were many days I found myself thinking I couldn’t believe how lucky I was to work in a place with an office cat. No matter how hectic or stressful the work day might be, there was always the calming presence of a softly purring feline contentedly nested in the cat bed on the corner of my desk or sprawled atop any paperwork I was focused on, bringing down the blood pressure and bringing up the smiles.”

In lieu of flowers, Buddy’s Tribune family is suggesting donations in his name to Buddy’s favorite cause, ARRF Animal Rescue and all the good work they do for pets in the Upper County. Tax deductible donations can be made online at www.ARRFAnimalRescue.org, by sending a check to ARRF Animal Rescue, PO Box 670, Roslyn, WA 98941 or dropped off at the Tribune office, 807 W. Davis Street by Safeway in Cle Elum, or at Roslyn Candy Company, 104 ½ E Pennsylvania Ave. in Roslyn.

Buddy’s Buddies (Memorial) Pet Giving Tree will return in November right after Thanksgiving as an ongoing testament to the good work Buddy did on behalf of ARRF and pets in need in our community. Watch the Tribune and nkctribune.com/buddy for updates.

“We sincerely appreciate all the affection so many people have shown for Buddy over the years, and know that we share our heartbreak over his passing with the community that loves him too,” said Hamberg. “We are fortunate to live in a community with so many animal lovers. Goodbye Buddy. You will be missed my furry friend.” 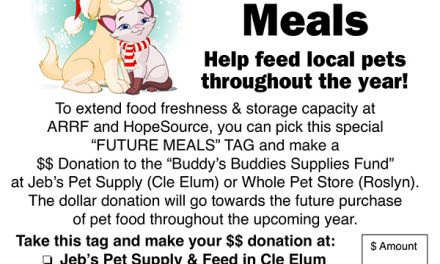 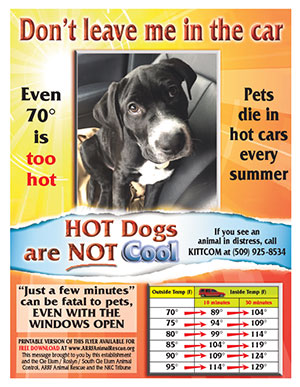 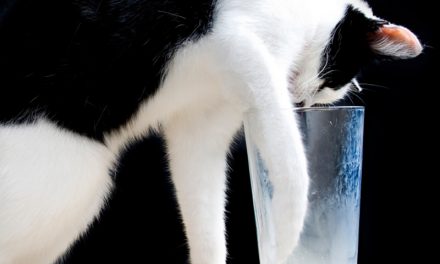