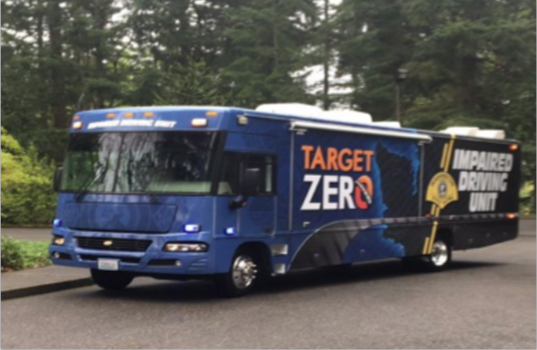 KING COUNTY – This Friday, November 29th is the kick-off for the Holiday DUI Emphasis Patrols. The Washington State Patrol along with several other allied agencies will have extra patrols out to remove suspected impaired drivers from the roadways in King County.

The Washington State Patrol has investigated 18 fatal collisions year to date with the majority caused by impaired drivers. The Mobile Impaired Driving Unit (MIDU) will also be deployed in a central location for all law enforcement to use during this emphasis. There will be processors on board along with a phlebotomist for search warrant blood draws if necessary. This will allow for the suspected impaired drivers to be dropped off and allow law enforcement to return to patrol for additional impaired drivers.

The MIDU is a self-contained 36 foot motorhome that has been retrofitted as a mobile DUI processing center and incident command post. The MIDU is equipped with three breath testing instruments, two temporary holding cells, three computer work stations, an incident command computer terminal, a dispatcher console with wireless access to WSP dispatch centers and a microwave downlink tower for real time broadcasts from WSP aircraft. This is a full service police station on wheels.

The Washington State Patrol will be hosting a kick-off event Friday, November 29, 2019 at 8pm at the District 2 headquarters, 2803 156th Ave SE, Bellevue, WA 98007. All law enforcement agencies, media and the public are invited to attend.

There will be a guest speaker who has a personal story of a tragic death that touched his life in which impairment was involved. He will also have the vehicle that was involved in this accident on display.

The Washington State Patrol would like to stress good choices through this holiday season and beyond. Have a plan and always drive sober!