School librarians demonstrate at the Capitol to protest funding cuts 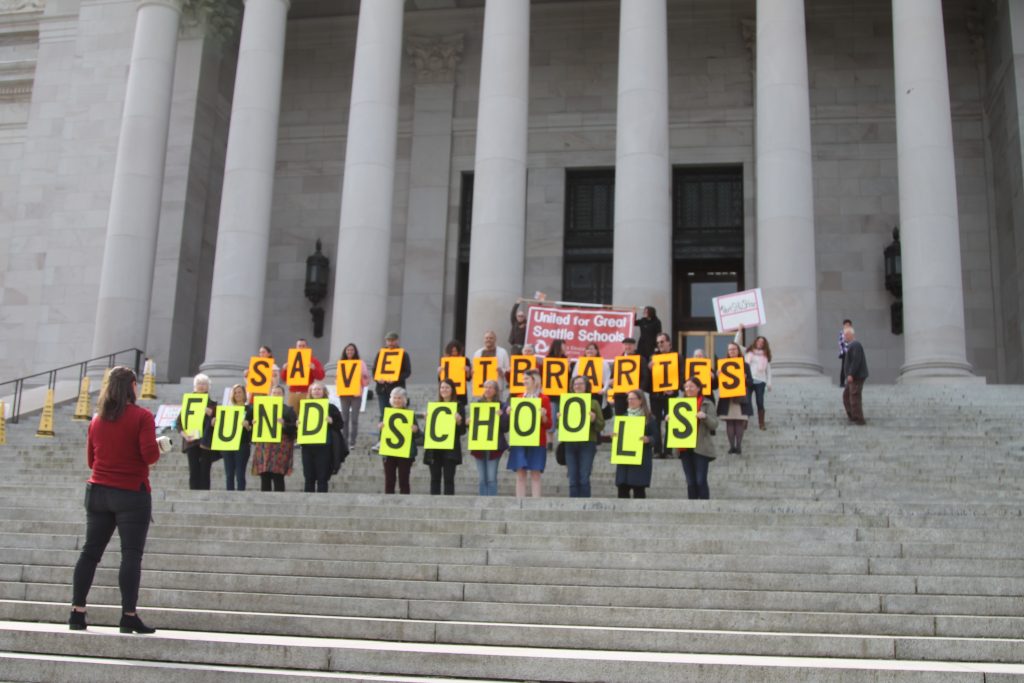 Seattle Public School’s librarians hold up signs on the capitol building steps, in protest of funding cuts that have resulted in cuts to libraries. Kate Eads, who organized the event, can be seen holding a megaphone addressing the group.—Photo by Emma Epperly, WNPA Olympia News Bureau

Seattle Public School’s librarians hold up signs on the capitol building steps, in protest of funding cuts that have resulted in cuts to libraries. Kate Eads, who organized the event, can be seen holding a megaphone addressing the group.—Photo by Emma Epperly, WNPA Olympia News Bureau

OLYMPIA — Seattle Public School librarians gathered on the steps of the Capitol building Tuesday to protest the lack of funding for schools and their libraries.

“Our jobs are getting cut in Seattle and our district officials say, ‘Well, it’s because the state doesn’t provide enough money. Go to the state.’ So, we’re here,” Eads said.

The librarians are hoping the state will provide additional funding for libraries in Seattle and across the state; they say funding has been cut because of lowered amounts districts can seek in voter-approved levies.

“When the state capped the levies and said, ‘too bad Seattle you don’t get any more,’ it left us out of jobs, literally,” Eads said.  “So, we have to close our libraries because our district says we can’t find the money, now that there’s no levies.”

“If you cut out library days, you’re cutting out access to the obvious, is checking out, but also the safe space in your school,” said Eads.

Lawmakers considered raising school levy caps earlier this session from $1.50 to $2.50 with Senate Bill 5313; however, the bill has stalled in the Ways and Means Committee. A change in levy rates would mean a change in the amount of funding a school gets in Local Effort Assistance, or levy equalization, which is state funding that ensures schools have a certain dollar amount per student.

The McCleary court decision in 2012 required the Legislature to fully fund “basic education.”

Funding for a full-time library is not considered part of basic education. The Legislature had been found in contempt of court until 2018, when it adopted a plan to put billions of dollars toward K-12 education in coming years.

Librarian Gail Myles, says the McCleary fix has made funding “equal but not equitable” for Seattle and many other districts.

The district will only pay for a half-time librarian in middle and high schools next year, leaving it up to individual schools and PTAs to fund libraries, said Myles and fellow librarian Paula Wittmann.

“We are considered and extra, even though we shouldn’t be,” said Wittmann. “…They say with the McCleary it’s fixed but it’s still not amply funded and that’s the paramount duty of the state. These kids are the future and it’s counting on them.”