Beware unsolicited seeds in your mailbox

Agricultural smuggling – a threat to farms, gardens, and our ecosystem 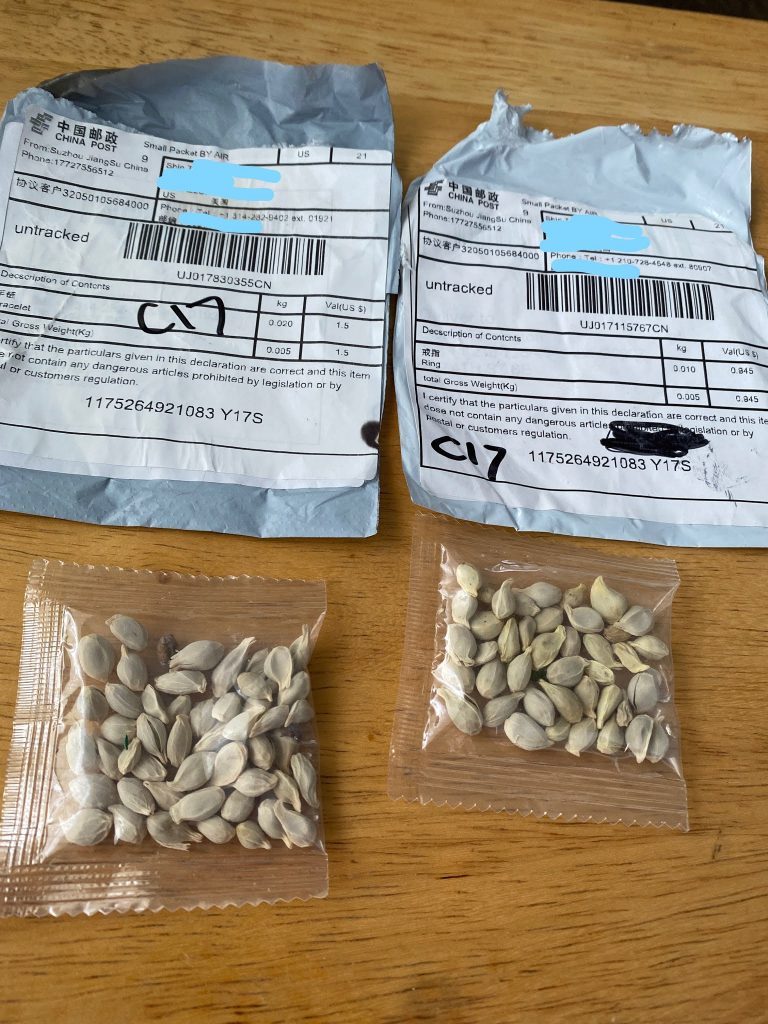 WSDA RECIEVED A REPORT of seeds mailed from China that the
recipient did not order.
Photo courtesy of WSDA

WASHINGTON – On Friday, July 24, Washington State Department of Agriculture received two separate reports of residents receiving seeds from China that they did not order. The package labeling indicated that jewelry was inside, but instead the residents found seeds.

We have also received reports of people who purchased seeds from an online retailer thinking the seeds were from the United States, only to learn when the package arrived in the mail (also usually listing something other than seeds on the mailing labels) that the seeds were from another country.

Avoiding plant import regulations and bypassing customs (for example, by mislabeling a package and identifying its contents as something else) to get plant material into the United States is known as agricultural smuggling and is not only illegal, but poses a serious threat to our farms, gardens, animals, and environment.

What Washington residents should do

Here is what residents who receive unsolicited international seed packages in the mail should do:

What about burning the seeds?

Burning seeds is not a guaranteed way to kill the seeds. Some seeds actually require fire and smoke to germinate, so burning an unknown seed could actually improve its ability to grow. If fire is not needed to help a seed germinate, then with enough time, fire could make the seed unviable. However, the average person may not be able to generate enough heat for long enough to kill the seed without a substantial risk to catching other things on fire.

What about grinding up the seeds?

We suggest that you do not open the seed packets at all. Opening and putting the seeds through a blender, for example, could release fungal or other plant diseases.

What residents in other states should do

Anyone outside of Washington State who receives an unsolicited package of seeds from China or other countries should contact their state plant regulatory official or APHIS State plant health director. Please hold onto the seeds and packaging, including the mailing label, until someone from your state department of agriculture or APHIS contacts you with further instructions. Do not plant or consume seeds from unknown origins.

USDA’s Animal and Plant Health Inspection Service (APHIS) is aware that people across the country have received unsolicited packages of seed from China. APHIS is working closely with the Department of Homeland Security’s Customs and Border Protection and State departments of agriculture to prevent the unlawful entry of prohibited seeds and protect U.S. agriculture from invasive pests and noxious weeds.

In addition to the work that USDA APHIS is doing, WSDA’s Plant Protection staff are also working with online retailers to prevent this from happening in the future.