Shea was expelled from the House Republican Caucus and stripped of his committee appointments after a private investigative report paid for by the House of Representatives and conducted by the Rampart Group accused Shea of participating in acts of domestic terrorism for his involvement with armed standoffs with law enforcement in Nevada and Oregon.

“Today closes my first month of fundraising,” Marshall said to the crowd. “I am happy to announce that it is going to be a shock throughout the Republican establishment.”

Joey Gibson, founder of the Patriot Prayer group, spoke to the crowd, praising Shea’s willingness to stand up for the rights of citizens in Bunkerville, Nevada and Priest River, Idaho when he felt the government had impeded their rights.

It is alleged that Shea organized armed support to prevent the government seizure of firearms from a veteran in Priest River and helped to organize and negotiate during the Bundy family’s armed standoff in Bunkerville.

Gibson led supporters to the office of House Minority Leader J.T. Wilcox to demand due process for Rep. Matt Shea.

An armed member of Washington Three Percent cursed Wilcox and called him a coward when he did not show up to address the marchers. The man yelled profanities as he made a gesture with his middle finger towards Wilcox’s office.

Gun rights advocates wore tactical gear and carried assault rifles in front of the House Chamber as they spoke to the crowd of the need for resistance against a “tyrannical” government.

Meanwhile, resistance to gun regulations such as voter-approved Initiative-1639 continues as county commissioners from Stevens County this week adopted a resolution to nullify the initiative, claiming the regulations are an infringement on Second Amendment rights.

Several law enforcement officials in the state vowed last year not to actively enforce the law, claiming that some of its provisions are unconstitutional.

And now, at least one county government has deemed it unconstitutional.

Stevens County Commissioner Steve Parker said any gun regulation to be implemented would be an infringement or restriction on constitutional rights. Parker urged that laws just be enforced as they currently exist.

The Legislature is currently considering bills that would outlaw gun magazines that automatically feed more than 10 rounds and a bill that would require firearm training for people who obtain permits to carry concealed guns.

Alexander Roggenkamp urged people to train themselves physically; he handed out cards for his firearm and survival training courses.

“If we have to fight, you guys need to actually be ready to fight,” he said to the crowd. 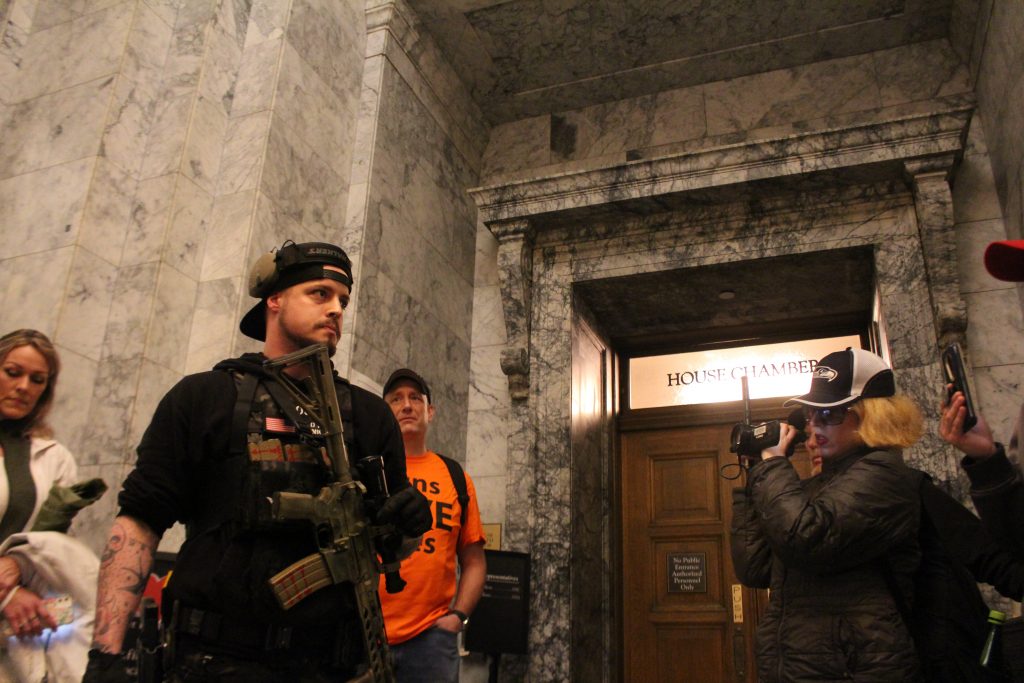 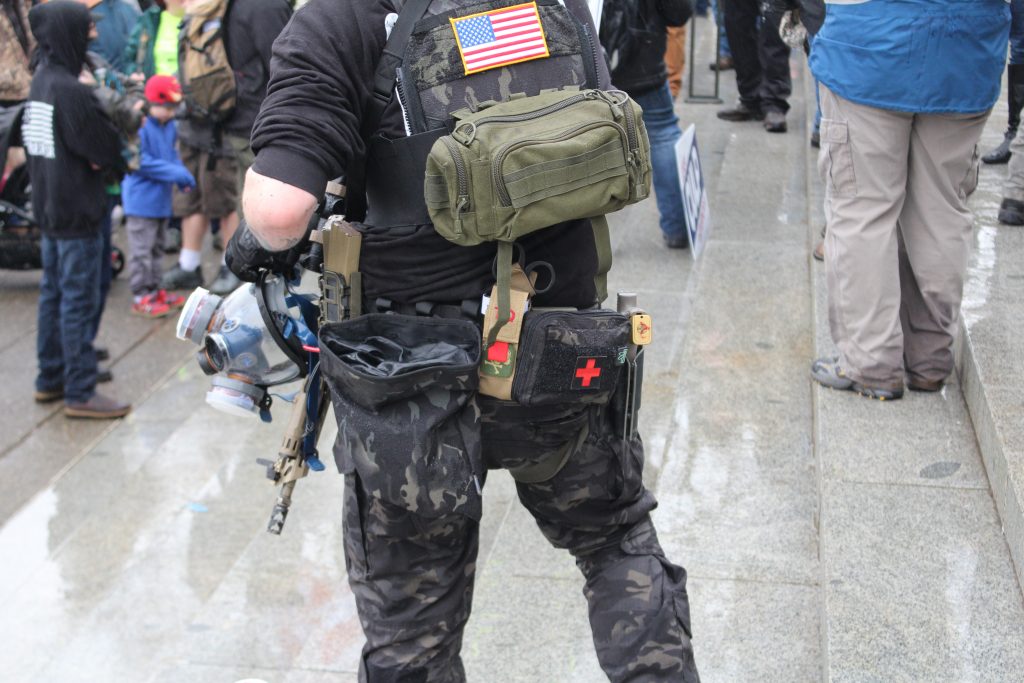 Gun rights advocate warns crowd of the potential need for forceful resistance in the future at gathering outside House of Representatives chamber. Photo by Cameron Sheppard,

Economic growth adds money to state coffers, and Democratic lawmakers have uses for it