OLYMPIA – Jan. 14, 2019 — A bill intended to enhance the safety of hikers, hunters and other outdoor enthusiasts would establish designated target shooting areas on some Department of Natural Resources-managed lands.

“Target shooting is not getting the same recognition as other forms of recreation,” Sheldon said in a telephone interview. Because of a lack of designated target shooting areas, there is concern that shooting activities might interfere with other recreational activities, such as hiking and camping.

Although recreational shooting is legal on DNR-managed lands as long as recreators follow guidelines established in Washington Administrative Code, the department has temporarily banned it previously because of wildfire risks.

If passed into law, the bill would require the agency to establish target shooting areas in Mason and Skagit counties by the end of 2019.

The measure does not affect state parks.

Herb Gerhardt, a 20-plus year DNR volunteer from Belfair, said many trails on DNR-managed lands are not marked on maps. Sometimes shooters will find areas of convenience, pulling off the side of the road and shooting into the woods.

“They don’t realize that there’s trail between where they are, and where they’re at,” Gerhardt said.

Not all sportsmen may see it that way, especially if the measure is expanded to Eastern Washington.

Ray Clark, owner of Clark’s All Sports in Colville, said shooters won’t like being boxed in.

“It might be fine on the coast, but we’d be totally against it here,” Clark said. “We have a lot of open ground with a smaller population east of the Cascades.

“It’s just another restriction being put on recreational shooters.”

Although there have been issues with some shooters leaving ammunition casings in the woods, Sheldon pointed out that many target shooters are “good sportsmen.” Many are members of the military from Bremerton to shoot and do haul out their casings.

Sheldon hopes that introducing the legislation will bring the issue to the attention of Natural Resources officials.

The 2019 legislative session is scheduled to begin Monday, Jan. 14.

Transform the City of Cle Elum and receive a tax credit

As Businesses Reopen, A Good Plan And Flexibility Are Key 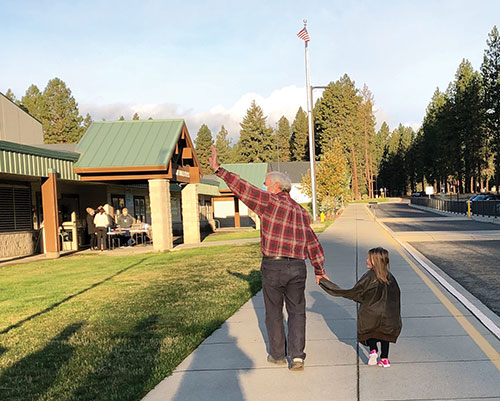