Red gemstones? Hmm, that would be rubies. That’s it! We saw the place when we were in downtown Cle Elum. Time to head back over there. But first, we needed to stop and pick up the task force we had left at the Comanche Pawnee Mining Co. where Kimmi Cebe was helping young Whimsey Cocoa develop his swing with a Keene rock pick when we went inside. In the hands of humans, it is hammer sized, but held by an elf it looks more like a full sized pick axe. So that’s why the suspect was buying up these picks. It’s beginning to look a lot like someone is digging for more than answers. But why would they need OUR magic dust if they were doing a legit mining operation? We were missing something. Whimsey reported, “Kimmi said they had lots of gold mining supplies and bags of Pay Dirt for people to pan for real gold and even do panning lessons, but that someone our height came in last week asking lots of questions about mining techniques and bought a bunch of supplies like these rock picks.” We thanked her for the information and the elves carried out their Grab-n-go Bags of Pay Dirt, grinning like prospectors who just hit the mother lode. But I was really getting worried about Mindy, and time was running out on wrapping up the case we came here to solve. Time to go from gold to rubies.

Ruby’s Printing, Scrapbooking and Things, llc in Cle Elum, that is. We worked our way downtown through the preparations for the upcoming Christmas in Cle Elum celebration to meet Ruby herself. Walking through the door, I could immediately tell that it would be impossible to keep the elf pack focused. A high pitched squeal of delight, “Stickers!” pierced the air, confirming my prediction. The Big North Pole Scrapbook was a favorite pastime for most off-duty elves back home. Ruby smiled as they immediately zoned in on her seasonal stock. I confess that even I have a soft spot for looking through the centuries captured in our extended family scrapbook, so I didn’t want to spoil their fun, but I just knew we were getting close to finding Mindy and saving Christmas. So I gave them the keys to the truck and told them to go figure out what chair we were supposed to pick up, with a promise that we would come back, and maybe even take a class, after the case was cracked. I asked Ruby what “a yarn about treasure” from our clue might mean. She showed us to the yarn and knitting supply section to look for further clues. The Glass of Seeing revealed a glow around a Christmasy red and green skein. We purchased the yarn and hurried outside where the elves were honking the horn.

A beautiful ornate carved oversize chair was securely strapped into the back of the pickup. Pippy said that they went driving down First Street and saw a furniture store and put two and two together. Tina Lynch over at Mountain Elegance Home Furnishing & Design seemed to be expecting them. “Max called and let me know that you would be here to pick up this special chair for the Santa photos with kids and pets over there. It’s so nice that they are collecting food for the local food bank,” she said with a warm smile. Pippy tugged on Santa’s coat. “Sir, remember you asked us to be on the lookout for a new mattress for you to rest better after your Big Night? We would have been here sooner, but there were so many to test out, like 20 or more, but we couldn’t decide. You and Mrs. C. should go try them out for yourselves to pick out just the perfect good comfy one that suits you two best!” 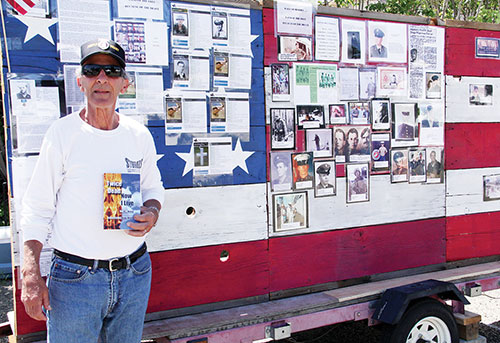